AKRON, Ohio — The family of Jayland Walker hosted a press conference Wednesday to mark what would have been Walker’s 26th birthday.

In between sorrowful birthday wishes by the Walker family, and a touching memory shared by Jayland Walker’s mother, the family attorney Bobby DiCello issued an accusation, saying the Akron Police Department and the Attorney General’s Bureau of Criminal Investigation are guilty of “possible collusion.”

“FOP’s knowledge of investigative findings that have not been shared with the Walkers’ legal team have egregiously compromised the investigation,” he said in a statement.

Akron police shot and killed Walker on June 27, after he led officers on a car and foot chase, eventually leaving his vehicle wearing a ski mask. He ran and then turned toward officers, and, according to police, made a movement they perceived as a threat.

Eight of the 13 officers on scene opened fire. The shooting is under investigation by the Ohio Attorney General’s Bureau of Criminal Investigation.

At the press conference Wednesday, DiCello said his team is calling on the U.S Department of Justice to take over the case.

DiCello pointed to a recent televised interview by a local news outlet in which Akron FOP President Clay Cozart spoke to the reporters about the events of that night.

Cozart’s comments to reporters indicated he knew details of the four-minute chase Walker led police on that night, as well as the officers’ reasoning for pursuing him, he said.

Cozart wasn’t involved in the shooting or in Akron Police Department operations, therefore should have no knowledge that hasn’t already been released to the public, DiCello said.

“He actually talks about what they actually think and you’ll find his comments online, many of them, many of you guys, even reported,” DiCello said to reporters. “There’s no way for him to know what another person thinks. So he either made that up, or he’s being talked to or he’s talking to [the officers].”

Akron Police Chief Steve Mylett and the city had urged patience as the BCI investigation unfolds, DiCello said, and asked the Walker family to trust the process.

“Now, there’s no good process, if the union chief, union leader, is involved in or receiving information about that, so he can share it with other officers, including the guys who are being investigated,” DiCello said.

Pam Walker shared a memory of one her son’s birthdays. (Photo courtesy of the Walker family)

DiCello said it is “wholly inappropriate” for Cozart to have that knowledge.

The officers involved didn’t give statements and weren’t sequestered until weeks after the shooting, DiCello said, adding, “it smells of a cover up.”

“Congratulations Mr. Cozart. You made yourself a witness,” DiCello said. “And we are going to drill down and find out how you became a witness.”

During a Q&A, DiCello was asked his opinion on the Akron police recently removing their name tags from their uniforms to protect against threats on officers’ lives.

“I’m a little bit desensitized to this kind of thing,” he said. “Because in this line of work, whether you’re a police officer or a lawyer who handles these cases, you get into some pretty angry water and you have to deal with that.” 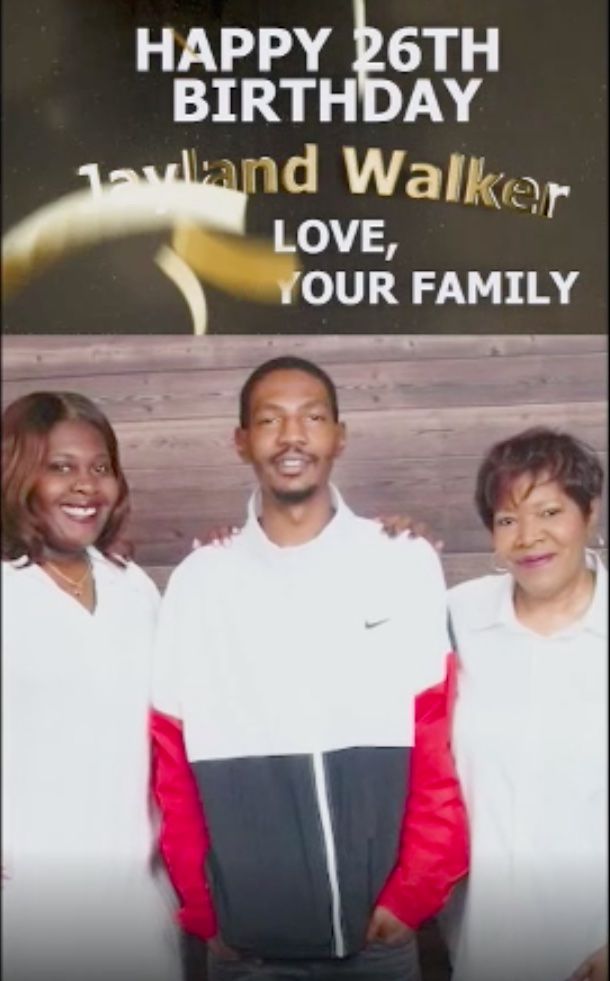 DiCello said he had spoken to Sen. Sherrod Brown recently, who is facilitating dialogue with the Justice Department.

Judi Hill, president of the Akron NAACP, also spoke and read a statement issued by the national NAACP, which the organization contacted U.S. Attorney General Merrick Garland to ask the Justice Department to open a federal, civil-rights investigation.

Hill said there are things that need to be done in Akron to protect residents “in a way that has not been done before.”

The police department and the city should stand behind what’s right and stop police chases for equipment violations, she said

The event also served as an opportunity for the Walker family to play a short video for Jayland Walker’s birthday. His mother, Pam Walker, shared a memory of one her son’s birthdays.

She said she once hired a WWE impersonator for the birthday party, who did a very good Stone Cold Steve Austin. The man was so good, Jayland and his friends were wide-eyed and speechless when the impersonator entered the party.

“But that’s one of the best memories I have of Jayland, and on his birthday,” she said. “That was a really great party.”

She thanked those gathered for coming and broke down in tears, saying “I love you, Jayland.”