A heaping pile of goetta nachos

If you gotta get your goetta, you now have two full weekends to indulge in the Queen City’s favorite meaty mixture at this year’s Glier’s Goettafest. 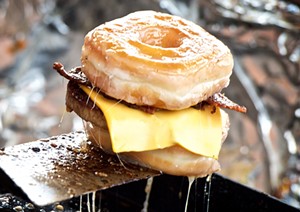 Gorge on more than 50 different sweet and savory goetta-infused dishes ranging from goetta nachos and deep-fried goetta cheese coneys to goetta brownies and a goetta donut sandwich. There are also eats for the goetta-averse.

Need a plan of attack as you navigate what to eat? Here are the current Goettafest vendors and menus:

If you’re not familiar with the fest’s namesake, goetta is a sausage- and oat-based dish that has been consumed in the region since the 1800s. The dish was inspired by the German immigrants who settled in the area; they added grain to a mixture of meats to help stretch their pork and beef supply over multiple servings.

Local goetta purveyor Glier’s Goetta launched Goettafest in 2001, expanding the super popular event from one weekend to two in 2019 to accommodate more visitors.

Get more info at goettafest.com.