Clifton Heights bar and live music venue Mad Frog has announced it will be closing this weekend after 26 years of operation.

Mad Frog has been drawing crowds from the nearby University of Cincinnati since December of 1996, when the spot opened as a bar. In April of the following year, Mad Frog also began operating as a live music venue, per a Facebook post from the bar.

“We have been a haven for nearly every musical genre during our 26 years, as well as for many live performance acts. Patrons from any walk of life could be sure to find something to match their interests, and no matter the turnout, could always be sure to have a great time,” reads the post. 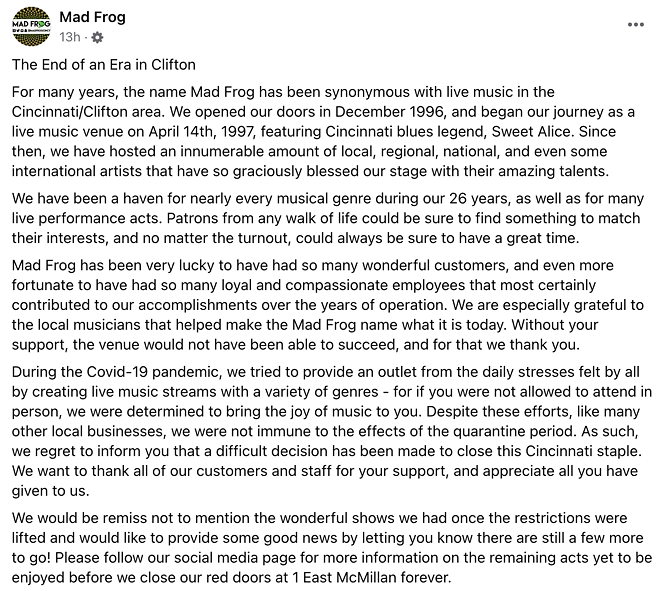 Mad Frog thanked its loyal customers, employees and the musicians who performed in the space, writing, “Without your support, the venue would not have been able to succeed, and for that we thank you.”

COVID-19 hit Mad Frog hard, forcing the space to close for quarantine and then open at a lowered capacity as things slowly started reopening. Unfortunately, for Mad Frog, like many other local businesses, this has been a difficult time and the bar says that led to its closure.

“We want to thank all of our customers and staff for your support, and appreciate all you have given to us,” the post reads.

They also want to remind everyone of the shows that have been performed since COVID and the few shows they have coming up before the official closing date on July 16.

The Frog Finale, Mad Frog’s last EDM show, will be hosted on July 15 followed by a Long Live the Frog final party on July 16.