Rendering: provided by Newport on the Levee

Shiners on the Levee interior.

Newport on the Levee is set to get a new casual barbecue spot this fall.

Shiners on the Levee, owned by Kentucky native Kevin Dailey, will be located in an 8,400-square-foot space at the levee. The spot will have your typical barbecue menu, featuring smoked meats plus appetizers, salads, sandwiches and sides.

The new barbecue joint will be the first restaurant in Dailey’s newly-founded Prodigal Son Hospitality Group, which he established after years of working in hospitality management across the country.

“The Levee is an untapped jewel with so much potential to be the entertainment anchor of Northern Kentucky,” said Dailey in a release. 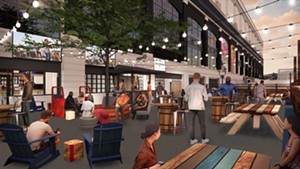 Rendering: provided by Newport on the Levee

Shiners on the Levee patio.

Entertainment like live music, line dancing and karaoke is planned for the new restaurant, which will be open seven days a week. The central bar will have a surrounding stage. There is also set to be a large patio with a fire pit, tables and TVs.

“The Levee used to be known for having great music venues, and we are so excited for Shiners to bring back live entertainment alongside a great dining experience,” said Regan Thomas, leasing representative at the Levee, in a release.

The opening of Shiners will coincide with the arrival of other new developments at the levee including Cuban restaurant Amador, which is also set to open next fall, and 16 Lots Summer Outpost, slated to open soon after.

Newport on the Levee is located at One Levee Way, Newport. Find more information at newportonthelevee.com.

Where to Find the Best Chinese Food in Louisville, KY