CINCINNATI – The city of Cincinnati wants to open all 23 of its pools this summer, but it can’t, at least not all of them.

Money isn’t an issue, and the pools are in fine working order. The city simply doesn’t have enough lifeguards to open all of them safely. Dozens of new lifeguards need to be hired in the coming weeks if there’s any hope to operate at full strength this summer.

Right now, the city plans to only open eight of its public pools.

“Summer is supposed to be a fun time of year for kids and families, so it’s disappointing that we aren’t opening as many pools as we can,” said Liz Keating, a City Council member and a parent.

Keating and the rest of City Council spent the last few weeks of their spring schedule working with CRC to find ways to open more pools this summer.

With current staffing, brownout scheduling could get them up to 11 pools at some point this summer. But they’re losing potential lifeguards each day as well.

She and the rest of City Council recently passed an ordinance that will allow some lifeguards to earn a bonus of up to $2,000 for working throughout the summer at a CRC pool.

Keating is also taking a less traditional approach to address the issue. She plans to spend her summer recess from Council volunteering as a lifeguard.

“I passed my swim screening this morning and will start courses to get recertified as a lifeguard. I plan to volunteer guard at (CRC) pools this summer so I can help keep pools open for our kids,” she wrote in a tweet attempting to advocate for more people to sign up to work at pools.

Her role will be as a fill-in, meaning she’ll “pinch hit,” as she called it, when a pool needs to fill a spot on the schedule. She expects to be treated like one of the team – even though her bosses may still be teenagers.

“I’m just one of the team,” she said with a smile. “I’ll answer to my managers and do everything they ask me to do. I will fall in line and do my job.”

Keating is no stranger to water. She swam collegiately at UCLA and spent her youth working as a lifeguard. She recalls fondly the relay races with fellow lifeguards, the equally competitive cannonball contests, and just having fun with friends all summer.

But it wasn’t all fun games, she said. There was also important work protecting the people and making sure people were safe and could enjoy their summer at the pool.

“I really hope that we can get more people to step up and sign up, take the free courses and come work as a lifeguard with me,” she said.

The hiring challenge isn’t unique to Cincinnati and it’s not something new. Pools across the country have struggled to recruit lifeguards for years, according to Bernard J. Fisher II, director of health and safety of the American Lifeguard Association.

Fisher said a third of nearly 309,000 pools across the United States are at risk of not opening this summer or suffering drastic reductions in hours. He thinks things will get even worse around Labor Day, when lifeguards hang up their whistles to return to school or head off on a family vacation.

Reasons range from higher paying jobs in other fields like food service to the required training required to become a lifeguard.

The pandemic also played a role because during that time, kids weren’t taking swimming lessons or becoming junior lifeguards, which left a large deficit in potential applicants.

“I think it takes a certain set of skills to become a lifeguard and we just don’t have that big of a pipeline in the city of swimmers or people who know how to swim,” Keating said. 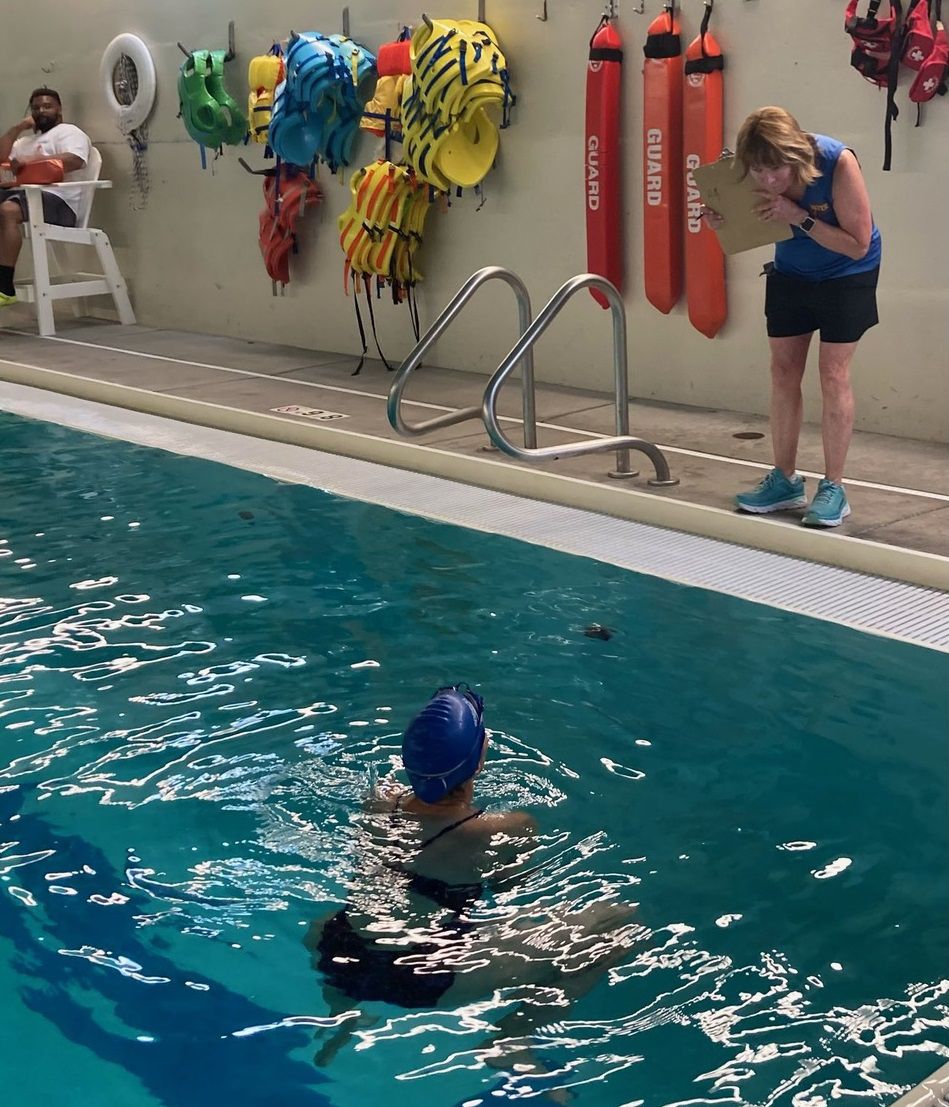 Not being able to open pools will add to that problem.

“That’s why having pools open is so important because we’re going to give kids the opportunity to learn to swim, to be comfortable around the pool and in the water,” she added. “That will help build that pipeline in future years.”

April Chappell, aquatics director for CRC, appreciates Keating’s desire to advocate for the importance of lifeguarding and trying to get people to sign up to lifeguard. But they aren’t looking for volunteers; Keating had to volunteer because of her position as a City Council member.

That doesn’t mean CRC isn’t open to other grown-ups signing up to work there, though. The vast majority of lifeguards are teenagers, but anyone at least 15 can apply.

Teachers and educators would make a great fit, Fisher said. After all, many already have a portion of the summer free. He feels retired people who enjoy swimming could be a great option as well.

“We’re really open to anyone who’s interested,” Chappell said. “It’s not just lifeguarding; people can coach a swim team or give lessons, work the gates. But right now we’re focused on lifeguards, so if you’re interested, come out and check us out.”

Most lifeguards are 15 or 16 years of age. Fourteen-year-olds can train to be junior lifeguards but aren’t old enough to work as a lifeguard. People older than 17 usually work as pool managers or assist with supervision, but they can be lifeguards as well.

Chappell was one of those teens. She began her 31-year career with CRC as a lifeguard after learning to swim while attending one of the organization’s summer camps.

It typically requires about 250 employees to operate CRC’s 23 pools safely. Currently, they have just under 100 lifeguards — and that number fluctuates regularly. Chappell called it the “nature of the business.” They still need about 120 lifeguards plus managers to open all the pools.

One of those private pools is Zeigler Park pool, which 3CDC operates. The company hires and trains lifeguards for Ziegler Pool. Those guards start at $12 an hour.

“We currently have enough guards to operate the pool but like everyone else, we are still searching for more help,” said Emily Stowe, with 3CDC.

CRC continues to look at other options, Chappell said. But she’s hopeful the sign-on bonus will lead to a “drastic” uptick in interest.

CRC had only 12 in the last training, but there are more than 70 signed up for the next one on May 31. Keating said a person has to commit to working for CRC to get the bonus and to make the training course free. They’re about $400 for everyone else.

“This is chipping away at that number we need and will hopefully allow us to open more pools in the next month or so,” Keating said.

Additional information about city-owned pools and CRC’s aquatics program on the organization’s website.