Brought to Cincinnati by the crew behind Dope! Asian Street Food, Decibel is the city’s first Korean fried chicken joint. The outfit now has a storefront location in Walnut Hills, adjacent to Esoteric Brewing, but Decibel launched in 2021 as an unnamed fried chicken pop-up in the Kroger On the Rhine food court, where the Dope! stall already was seeing great success.

Decibel got its start when Dope! owner and founder Kam Siu, who also runs Asian food supplier Panda Trading Company, and operating partner Mapi De Veyra, the former executive chef at Quan Hapa, were planning to expand Dope!. Fortunately for chicken lovers, they decided the storefront they were looking at should be used for a different concept.

“When we saw the space (in Walnut Hills), we both looked at each other, and said, ‘Fried chicken. Korean,’” Siu says. “And then we put our heads together and really worked on the recipe, the execution side, what the operation looked like, and then we started putting all the pieces together.”

Dope! had expanded rapidly since opening at Kroger in 2019, adding a second Kroger location in Anderson and opening a standalone restaurant in Hyde Park last year. Kroger approached Siu and his team in early spring 2021 and asked if they’d be interested in taking over an additional stall in the On the Rhine food hall.

“We said sure, let’s take the Korean fried chicken concept and let’s do a pop-up and see what happens,” Siu says. “So while Walnut Hills was being built out, we did the pop-up and it was a huge success. We thought, ‘We have something really good so let’s just keep it going but refine the process.’” 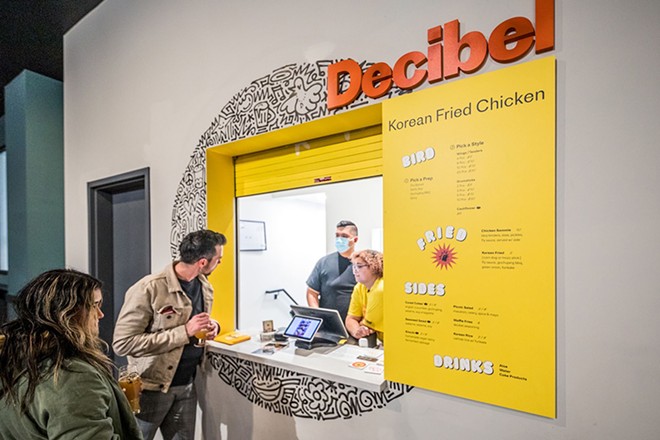 When you arrive at Decibel in Walnut Hills, there’s a takeaway entrance and window in addition to a dine-in window.

Korean fried chicken isn’t a new trend. In Korea, it’s often consumed as a street or bar food, and in that way continues the Dope! tradition of incorporating world street foods into its culinary repertoire — as its “Asian Street Food” moniker would suggest.

When you arrive at Decibel in Walnut Hills, there’s a takeaway entrance and window in addition to a dine-in window. The dine-in window is located inside Esoteric Brewing, which itself is housed within the larger and recently renovated Paramount Building.

Now, you can get the same offerings at this Decibel as you can at the Kroger On the Rhine food hall — various iterations of Korean fried chicken and other fried items. On Sundays, though, something magical happens here — brunch, which began in January.

“We have an ube chicken waffle, which is this Filipino taro-like flavor,” De Veyra says. “We have kimchi fried rice with Spam, and we have Korean street toast. There’s an omelet in there, with cabbage and carrots, and then there’s ham and American cheese.”

On a recent visit to Decibel, my boyfriend and I ordered each of the things De Veyra listed. We also tried the waffle fries, which I highly recommend ordering with every meal at either Decibel location. The fries were done to perfection, liberally showered in “Decibel seasoning,” which is a savory melange of flavors. They were served with “fly sauce,” a tangy, creamy aioli and ketchup mixture. 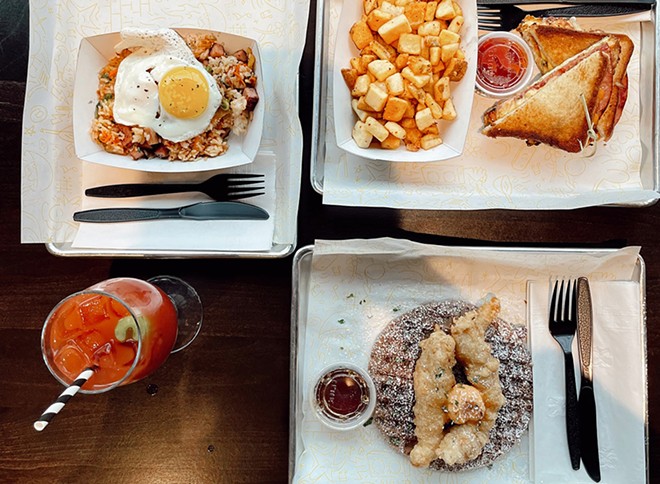 The ube waffle was the coolest, in part because of its color. Ube, or purple yam, is mixed into the batter, and the waffle arrived crispy and golden on the outside, with a pillowy, chewy and vibrant violet interior. The waffle was dusted in powdered sugar and served with two Korean fried chicken tenders dipped in fly sauce, with syrup on the side. Next time, I would avoid the syrup drizzle — it made the airy waffle a little soggy — but the crunch of the tenders next to the soft ube goodness was just *insert chef’s kiss*.

The Korean street toast was served as a hefty, saucy sandwich that we split, and the kimchi fried rice was topped with a beautifully fried egg and served with a side of crispy, airy home fries. (They’ve been used a lot, but those two particular adjectives, “crispy” and “airy,” are inextricable from the Decibel experience.) I’ve not had a more filling and gratifying brunch experience in a hot minute.

I also took a solo venture to the Kroger On the Rhine Decibel location during a workday lunch break, and my trek there was equally pleasurable. I got my order to-go, and when I returned to my office to shovel the chicken tenders into my mouth, I was delighted by how many waffle fries were packed in the order.

I also ordered the cured cucumbers, which had taken a bath in gochujang (a sweet-and-spicy chili paste), sesame and soy vinaigrette. Next time, I want to try a Korean fried corn dog, which vegetarians can order as a Korean fried mozzarella stick.

The raison d’etre for all of this is the Korean fried chicken itself, which can be ordered as wings, tenders or drumsticks. Select a sauce — dry spiced, garlic soy, gochujang barbecue or simply spicy — and how much sauce you want, depending on the type of chicken you order (vegetarians can swap Korean fried cauliflower for the chicken). Decibel also caters to its Catholic-heavy Cincinnati base by offering two Lenten specials: fish and chips as well as a fish sandwich.

“I think it’s about timing,” De Veyra says. “When Kam and I walked into that spot, right beside a brewery, we were like, ‘Fried chicken. That’s it.’ You know? How can we make it different? It’s always about being ahead of the game. Being the first Korean fried chicken in Cincinnati is huge, and now we have two locations.”