OHIO — William Wilson said pumpkin carving is freeing and he can practice the art form for hours at a time.

“Contractor is what I do for a living, but art and carving is definitely my release,” said Wilson, a professional pumpkin carver and Cincinnati native.

He’s improved his craft in recent years, taking Zoom classes from Deane Arnold, who is a world-renowned pumpkin carver and Reynoldsburg native.

“The first class I had the opportunity to carve with some great sculptors and it was just kind of the way he just broke everything down and the way that he teaches. It really gives me a different perspective on my art,” said Wilson.

Arnold said Wilson and his other protege, David Smith, a Westerville native, who has also made appearances on the Food Network, have both shown vast improvement since their Zoom class days.

But on this day, all three men are proving practice makes perfect.

“William had his own style, very cartoony. What they’ve been doing, I said getting out of their comfort zone, how they’ve improved is now they have more in their toolbox,” said Arnold.

“I always kind of tell everybody there’s a taco truck on every corner, but you might only have one pumpkin artist or two per state. So we’re looking to have singled out a lot of the audience automatically,” said Smith. 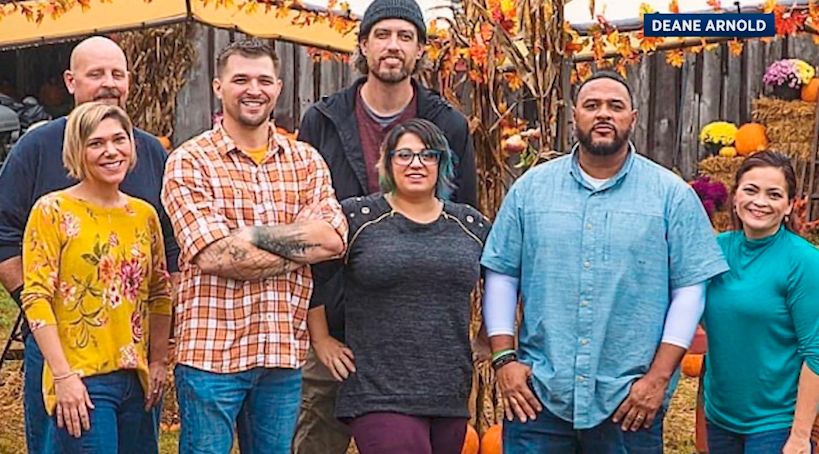 Word got out and Wilson was cast on season two of the Food Network’s Outrageous Pumpkins.

Currently, Wilson and Titus Arensberg, a native of Newark, are in the running for the top prize of $25,000.

“I’ve watched both of them, from that starting point, of already excellent to getting off in a different direction and getting more excellent,” said Arnold.

Although Wilson knows the outcome since it was filmed a year ago, he remains humbled by the experience.

“My goal is actually happening right now. Is to carve with great artists to share experiences, and to put out quality work, and to constantly be learning. Working with some of the greats and being able to have conversations and being able to ask them about their weak points and really have them give perspective to art, there’s nothing like it,” said Wilson.

The season finale of Outrageous Pumpkins takes place at 10 p.m. on Sunday, Oct. 24, on the Food Network.