When Decibel Korean Fried Chicken opens this month, it will be the first Korean fried chicken joint to open in Cincinnati. Moreover, it’s set to be only the second such eatery in the state of Ohio. But more than any of that, it’s just a really good idea.

“It’s delicious but it’s also fried chicken,” says Mapi ​​De Veyra, chef at Decibel, who co-owns the establishment with Kam Siu, the restaurateur behind DOPE! Asian Street Fare. “Who doesn’t love fried chicken? Kam and I saw the space in Walnut Hills beside Esoteric. We were like, ‘What’s going to pair well with a brewery that’s not barbecue?’”

“Mapi got word that the space was open, so he said, ‘Hey, let’s go check this place out,” Siu explains. “We both looked at each other and had the idea of fried chicken. But what can we do that’s different than everyone else? Mapi said, ‘How about fried chicken?’ I said, ‘Sold.’”

De Veyra, who used to serve Korean fried chicken as a special when working as the chef at Quan Hapa, loves the dish. “I tried it once and got really hooked,” he notes.

If you’ve come across Decibel’s food at the Over-the-Rhine Kroger food court—operating for a while under the not-quite-moniker “Yet to Be Named Korean Fried Chicken Pop-Up”—you may assume the Walnut Hills venture is an expansion of that idea. In fact, it was always the end goal, with the Kroger space more or less serving as a staging area while they got the carryout space ready for business. 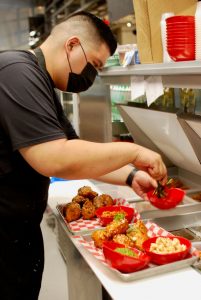 Decibel is just the latest in a series of great ideas from the team that previously brought the area DOPE!, the ramen and dumplings shop that’s recently taken the city by storm with locations in On the Rhine Eatery in Over-the-Rhine, Anderson and Hyde Park.

“We had no idea doing ramen noodles was going to put us on the map, then the dumplings were really well received,” Siu explains. “We evolved our concept from there.”

The summer’s opening of DOPE!’s Hyde Park location represents the brand’s first free-standing eatery, but Siu says he’s not done yet. He wants to open another four to five locations in the Greater Cincinnati area at some point. “It’s just a matter of finding the right area that makes sense,” he adds.

The duo’s restaurant group (officially titled Home Skillet LLC) isn’t content to settle into a niche, either, proven by their takeover of The Pelican’s Reef, a 25-year-old seafood establishment in Anderson—not a decision most would have projected for a team with proven success in Asian street food. The property went on the market three years ago, catching their attention shortly after. Upon visiting to check it out, the team was ready to sign.

“We love the vibe that it gives off, but the biggest thing was paying attention to the host stand,” Siu explains. “They greeted everybody by name. You can’t find a restaurant where you know everybody’s name that walks in through the door. The customers would come in and be greeted by name, but on their way to the table, they’re talking to two, three other people. And to top it off, it’s good food. They do a really good job and it’s a great bar scene.”

Siu says the plan is to leave the menu alone for the main restaurant, though The Reef Top, the upstairs space, will be rebranded with a focus on Tiki-style drinks and a lots of island fare—Cuba, Jamaica, the Caribbean and some Polynesian-style cuisines—on the menu.

If any (or all) of this has you excited about this team’s vision for Cincinnati dining, hold onto your seats. Siu says he and De Veyra have a number of plans they’d like to pursue in the future. “There’s going to be some more fun things from our group, for sure,” De Veyra notes.