AKRON, Ohio — Monarch populations are declining alarmingly, causing conservation officials to ask residents to help the golden butterflies have access to food to survive their long migration each year.

Milkweed is the only plant monarch butterflies use for egg laying and, as caterpillars, rely on for food, according to officials at the Ohio Pollinator Habitat Initiative (OPHI).

But about 2.2 million acres of potential milkweed habitat are lost in the U.S. each year, according to estimates by the organization Monarch Watch.

In addition, changing weather patterns from climate change are bringing storms with hail, high winds and freezing temperatures that are taking a toll on the forests monarchs migrate to in winter, said the Wildlife Division of the Ohio Department of Natural Resources. Development and herbicides used in farming are also to blame.

Losing pollinators could be catastrophic because butterflies and bees are responsible for about one-third of the world’s food supply, OPHI said. Their movement from plant-to-plant spreads pollen that grows fruits and vegetables.

Most people are aware monarchs migrate annually, but many don’t realize monarchs are the only butterfly to make a laborious two-way migration, like birds, each year, according to the U.S. Forest Service.

The eastern population of monarchs has diminished by 90% over the past 20 years, the ODNR said.

But much like urban beekeeping, which became popular in Ohio in the past decade, individuals and organizations like OPHI are stepping up to help monarchs.

In Summit County, Chalan Lowry started a pollinator garden at her home a few years ago, to attract and support bees and butterflies. As executive director of the Portage Animal Protective League, Lowry was already in tune with animal welfare.

But her interest in monarchs grew exponentially once she learned their habitats and food supplies were diminishing, she said, and that fewer than 5% of monarch eggs ever make it to adulthood.

“Coupled with that, the lack of habitat for them and the use of lots and lots of pesticides and chemicals everywhere, I just thought I should do something, you know, to help them and so I started researching,” she said.

She began to watch for a tiny monarch seed or tiny caterpillar to appear on the milkweed she grew, which she put into protected containers. She erected a netted area in her yard to keep them safe from birds and other predators once they grew larger and formed a chrysalis.

When each monarch emerges from its chrysalis, and its wings have dried, Lowry sets them free. So far this year, she has helped 75 young monarchs take flight from her backyard.

Some will stay in the area and continue to pollinate, she said, while others, especially those born in September, will make the trek to Mexico.

For advice and support, Lowry joined the Facebook page Monarch Maniacs of Ohio, which has more than 4,000 members, all working to strengthen monarchs’ chances of survival.

“So many insects are at risk right now,” Lowry said. “And, you know, without insects, our world collapses.”

The biggest threat is chemicals, including the mosquito spray municipalities often use in summer, which residents can opt out of in many counties, Lowry said.

“I got my whole neighborhood to opt out so nobody got sprayed,” she said. 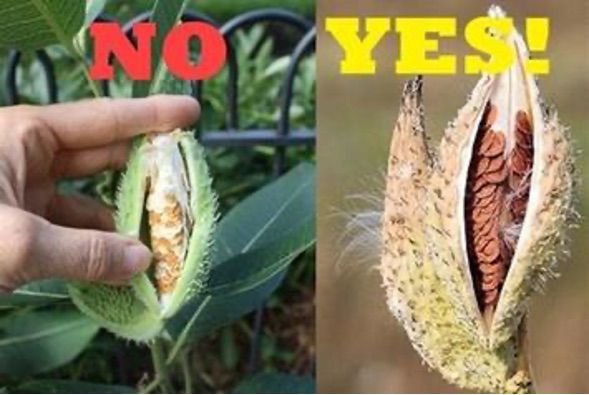 “I’ve got lots of pollinator gardens and I’ve got a water source and a little pond,” Lowry said. “My milkweed’s even in my vegetable garden. I just put it wherever I can fit another plant.”

Summit Soil & Water Conservation District is also encouraging area residents to plant milkweed, wild flowers and grasses that are native to Ohio, which Education Specialist Sandy Barbic said is beneficial to both monarchs and water conservation.

“Native plants soak up the stormwater, and a pollinator garden is another kind of native plant garden,” she said.

The district is also asking anyone who has grown common milkweed to harvest the seed pods and take them to the local Ohio State University Extension office at 440 Vernon Odom Blvd. in Akron.

The pods will be processed to capture the seeds, which will then be distributed to conservation districts around the state for planting, Barbic said.

To request pollinator plant seeds, visit the Ohio Pollinator Habitat Initiative website. You can watch a Google Earth tour of the migration of the eastern population of monarchs on YouTube.