The parents of the six-year-old girl frisked at a New Orleans airport by a TSA worker today spoke out about the ordeal.

Selena and Todd Drexel, from Kentucky, told ABC’s Good Morning America they now want the TSA to change how it screens children after their daughter Anna was subject to an invasive body search.

The family had been coming home from a holiday earlier this month when they were stopped by airport security.

Scroll down for video

Anger: Selena and Todd Drexel, pictured with their daughters from left: Grace, Anna and Caroline, have spoken out about the ordeal

The couple, who also have a nine-year-old daughter, Grace and a two-year-old daughter Caroline, said everyone bar Caroline had to go through the airport scanner, but it was little Anna who was selected for a pat down.

‘I did ask questions as to why she was being selected,’ Mrs Drexel told the show. ‘I didn’t get a lot of information.

‘I did ask for alternatives and asked for her to be rescanned but was refused.’

The couple managed to capture the frisk on film and then posted it on YouTube. 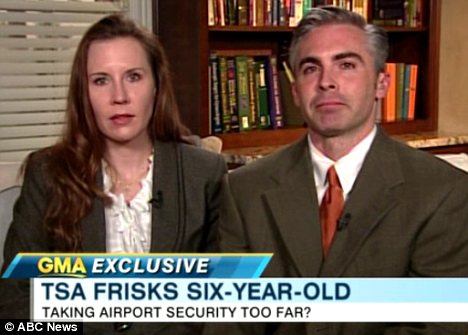 Concern: The couple are now calling for the TSA to change how it screens children after their little girl’s ordeal

Dr Drexel said Anna had been confused by the search and had started crying because she thought she’d done something wrong.

‘Initially she was confused, but she’s very respectable of adults and did what she was asked to do,’ he said.

‘But afterwards she broke down with crying because she really didn’t understand what she’d done wrong. So we had to try and explain this to her.’

When asked why the couple had posted the footage on YouTube Mrs Drexel said they had had a very bad feeling about what had happened and wanted to get other people’s thoughts on it. 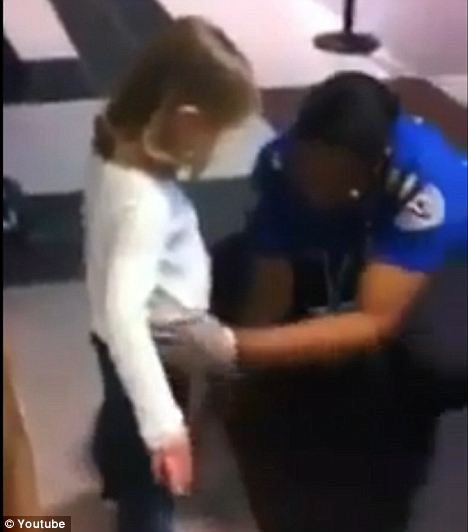 Gripped: The TSA agent probes down little Anna Drexel’s trousers, running her fingers around the waistband

‘We felt it was inappropriate,’ she said. ‘We teach our children to say no and that it’s not OK for folks to touch me in these areas.

‘Here we are saying well, it’s OK for these people. We feel for children especially the answer should always be no.

‘There needs to be different screening producers especially for children,’ she added.

‘If we don’t find other ways we’re making them more vulnerable to people who would harm them in that manner.’ 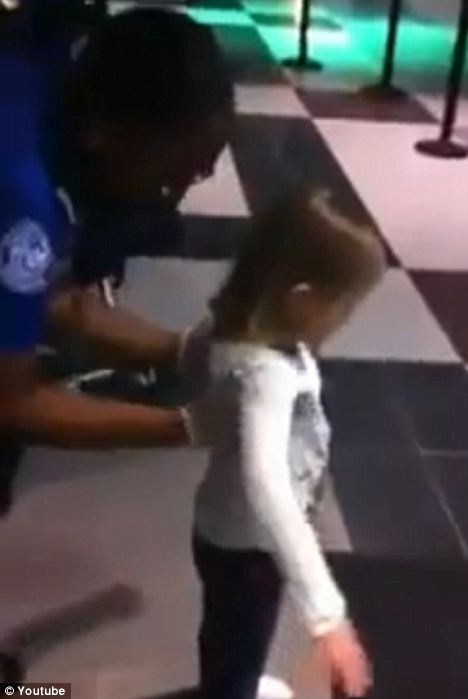 Upset: Anna’s father Todd, told Good Morning America his daughter had been upset by the frisk and didn’t understand what she had done wrong

The disturbing footage shot by the Drexels shows Anna being called forward for a full pat down and finger search by a burly TSA security agent.

Just before the search begins Mrs Drexel asks ‘can’t you just re-scan her’, before being told ‘no’ by the TSA guard as the small child is called forward for the search.

The gloved guard feels the child all over, poking her fingers down the child’s trousers before running her hands around the waist band. 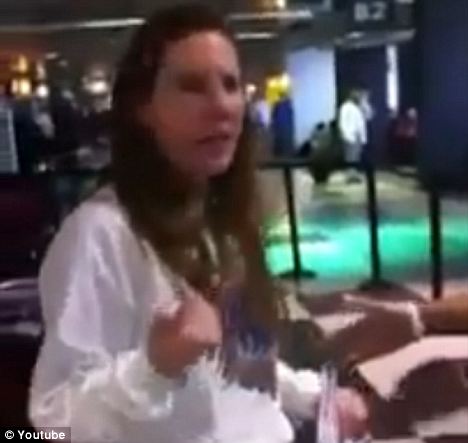 Angry: Anna’s mother Selena said she asked for TSA workers to use alternative methods or rescan her daughter but they refused

As the female guard touches the child’s bottom she says: ‘ I am touching your sensitive area with the back of my hand.

She also runs her hands over the child’s legs, arms, chest and groin areas.

Mrs Drexel can then be heard off camera saying: ‘They are doing the drugs test on her, the whatever test…on the six-year-old.’

A man can then be heard saying: ‘ I understand, they are searching.’

In a statement, the Transportation Security Administration said the officer followed proper procedure but that the agency is now reviewing its screening policies.

The search is just one of several invasive incidents that have enraged air travellers in recent years.

Last year it emerged the TSA were being sued for an incident at the Corpus Christi airport when a woman’s breasts were exposed.

An unnamed 23-year-old college student was allegedly singled out for ‘extended search procedures’ before flying in 2008.

‘As the TSA agent was frisking plaintiff, the agent pulled the plaintiff’s blouse completely down, exposing plaintiffs’ breasts to everyone in the area,’ the Amarillo Globe-News quotes the lawsuit as saying.

Last November the video of a 3-year-old girl being frisked at a Tennessee airport caused national outrage.

Mandy Simon was seen sobbing and pleading with staff at Chattanooga, Tennessee airport.

She had become upset after having to have her teddy bear put through an X-ray machine and can be heard screaming: ‘Stop touching me!’

In December last year, University of Cincinnati architecture student Aaron Tobey, 21, was arrested after a protest over the Constitution’s Fourth Amendment rule against ‘unreasonable searches and seizures’.

He exercised his right to opt for a pat-down from agents rather than walk through new x-ray machines and imaging scanners at airport security.

With the wording of the 4th amendment written across his chest, he stripped down to his underwear in the airport on his way to his grandfather’s funeral, in front of Transportation Security Administration (TSA) officials.

And earlier this year at least two passengers, including a 54-year-old Missouri City man, complained about airport staff putting their hands down the front and rear of their pants.

Thomas Mollman, 54, said he experienced the controversial ‘pat down’ when he was travelling through security at Fort Lauderdale Airport.

Mr Mollman, who was wearing shorts at the time of the search, said he was subjected to a ‘groping’ by a TSA officer, and he believe his experience was tantamount to sexual molestation.

He said: ‘[The officer] put his hand in between my underwear and my skin and did a 360 all the way around, touching certain sensitive points in the back and the front.’