CINCINNATI — Downtown Cincinnati came to life this past weekend in ways it hasn’t in more than two years because of the COVID-19 pandemic.

Overall, business was good, if not great, for those involved, according to initial reports from business and civic leaders. But they also stressed there were still a few challenges, ranging from traffic problems to a public safety incident in the heart of the city.

Tens of thousands of fans were in town for the star-studded Cincinnati Music Festival. Beyond the concerts, the city hosted Black Tech Week, art shows, lectures, a food festival, and introduced the Cincinnati Black Music Walk of Fame.

Fans from near and far also filled up Great American Ball Park and TQL Stadium to watch the Cincinnati Reds and FC Cincinnati play.

But the focus was the Cincinnati Music Festival, which was making its return to the shores of the Ohio River after a two-year hiatus.

The historic festival drew 78,000 people on Friday and Saturday nights at Paul Brown Stadium, according to The Santangelo Group, which produces the Cincinnati Music Festival. That doesn’t include figures from the show starring Ari Lennox, BJ The Chicago Kid and Cincinnati native Arin Ray that took place Thursday night at the neighboring Andrew J. Brady Music Center.

Saturday’s concert, headlined by Janet Jackson, sold 42,000 tickets. It drew the largest crowd on a Saturday in the 52 years of the Cincinnati Music Festival, according to the event promoters.

Vice Mayor Jan-Michele Lemon Kearney called the past weekend — and really all last week — an opportunity for Cincinnati to shine on a national stage.

“There were events everywhere, people everywhere, and it seemed like everyone was having a great time,” said Lemon Kearney who attended both concert nights and several other related events around town. “It was just a really fantastic time to be in Cincinnati.”

The big weekend for Cincinnati

Nostalgia Wine & Jazz Lounge opened on Vine Street in the middle of the pandemic. The venue’s founder and co-owner, Tammie Scott, said this has been the best week of business in Nostalgia’s nearly two years of operation.

That success wasn’t just because of the music festival either, Scott said. Earlier in the week, people from Detroit, Chicago and elsewhere stopped in during Black Tech Week, a national technology conference hosted in Cincinnati for the first time this past week.

“We had people in town for the conference stop by in the middle of the week just to kind of see what the city had to offer. A lot of those same people came back this weekend,” she said. “This experience was great for the city and the small business in this community, especially those in OTR.”

The weekend was great for bars and restaurants, Scott believes. But small shops and vendors took advantage of the extra foot traffic, as well. 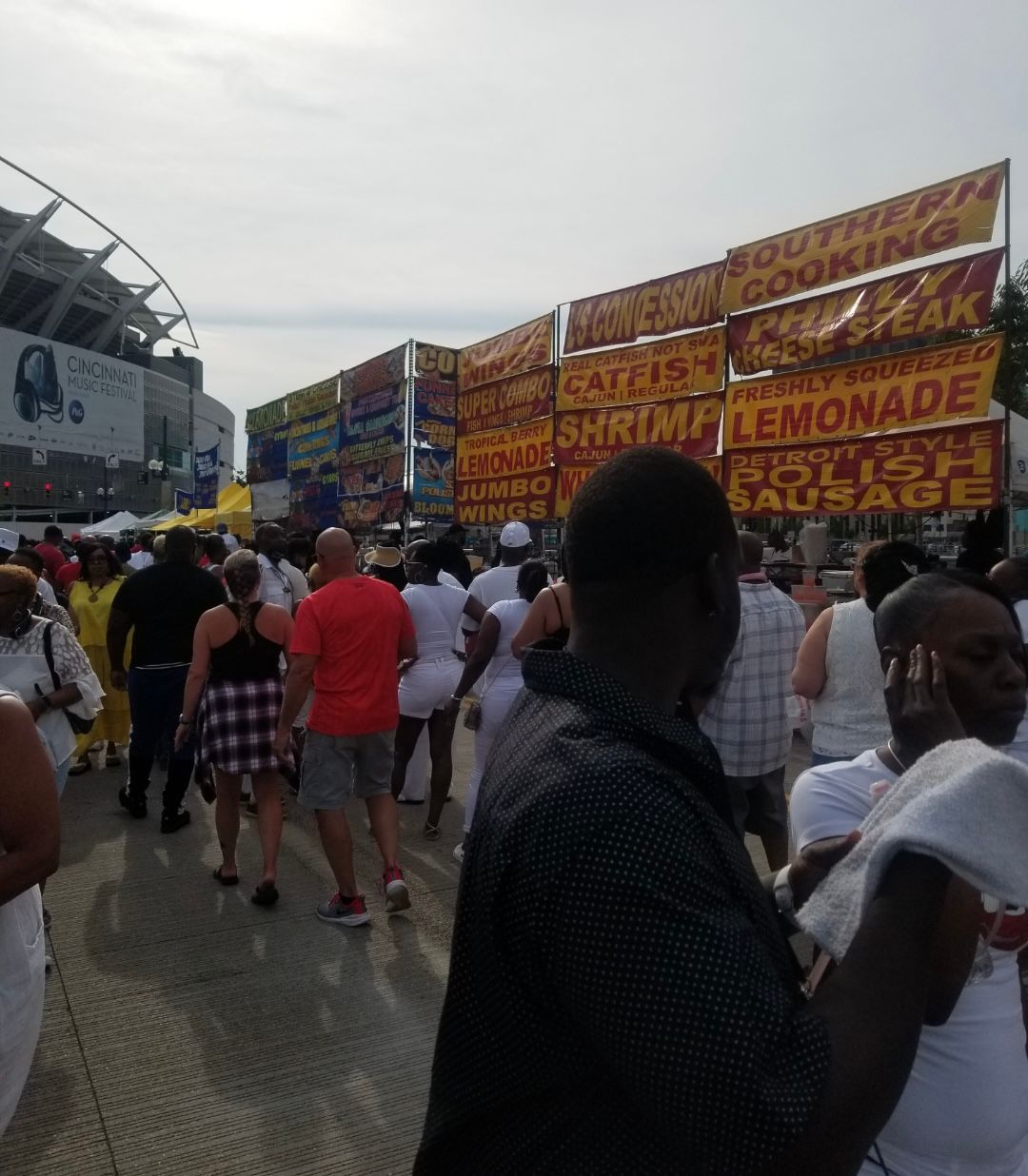 Concert-goers and others downtown check out Festival513 vendors as they make their way toward Paul Brown Stadium. (Photo courtesy of Bomani Tyehimba)

On Friday and Saturday, more than 80 vendors lined Freedom Way outside Paul Brown Stadium, for Festival513.

“It was a great success,” said Bomani Tyehimba, founder of Festival513. It hasn’t taken place in the past two years because of the cancellation of the music festival. “People seemed to be happy to be back out and about in Cincinnati.”

Tyehimba said he saw a “big increase” in terms of concertgoers and food traffic this year. He attributed the uptick to the popular musical lineup and the loosening of restrictions related to the pandemic.

He also noticed a few hats and jerseys of the hometown Reds and visiting St. Louis Cardinals at the festival. That added activity downtown “benefited everyone,” he said.

While he doesn’t collect sales figures from his vendors, Tyehimba said the weekend went well for a lot of them. “More than a few” have already promised to come back next year.

“Anytime a vendor says that they’ll be back, that’s a pretty good indication that they did well economically,” he said.

A study commissioned by Visit Cincy — the local convention and visitors bureau — in 2018 valued the annual economic impact of the festival at $107.5 million.

Julie Calvert, president and CEO of Visit Cincy, described the Cincinnati Music Festival as having the greatest tourism impact of any annual event for the region. She expected local hotels to be full last weekend. Those numbers aren’t yet available.

“Having most of our major venues activated at the same time, plus complementary events all over the region, demonstrated how powerful tourism is in Cincinnati,” Calvert said. “Weekends like this have cemented our reputation for hosting large-scale, safe, successful events.”

People packed Washington Park on Saturday. The pre-match rally for FC Cincinnati ahead of its showdown with Nashville SC attracted fans of the orange and blue and their opponents as well. Many Nashville supporters — and their bright yellow jerseys — were visible all over downtown for the day.

To celebrate the music festival, the park hosted a living art studio as part of its CMF Outdoor Museum. A collection of local 10 artists of color created artwork throughout the day capturing the city skyline, energy and excitement of the crowd finally being able to come together to enjoy the music festival.

Saturday night, five local artists went to Paul Brown Stadium to capture their interpretation of what they were seeing both on the stage and in the crowd.

“The return of Cincinnati Music Festival and its affiliated events activated spaces throughout downtown, from The Banks to Over-the-Rhine,” said Joe Rudemiller, a 3CDC spokesperson. “The energy was infectious, and the remarkable celebration of Black culture, music and cuisine galvanized the community, creating a successful weekend that we’re thrilled to have been able to support.”

Not so good for everyone

Tony Castelli, the marketing director for Earth & Ocean Restaurant Group, said Thursday through Saturday are always busy times for the company’s restaurants, especially the two downtown—E+O Kitchen at The Banks and OKTO, an upscale Greek restaurant in the business district.

Those restaurants usually see a “boost of energy” during Bengals games or standalone concerts at the Brady Music Center, Castelli said, especially when they attract a lot of out-of-towners like this past week. 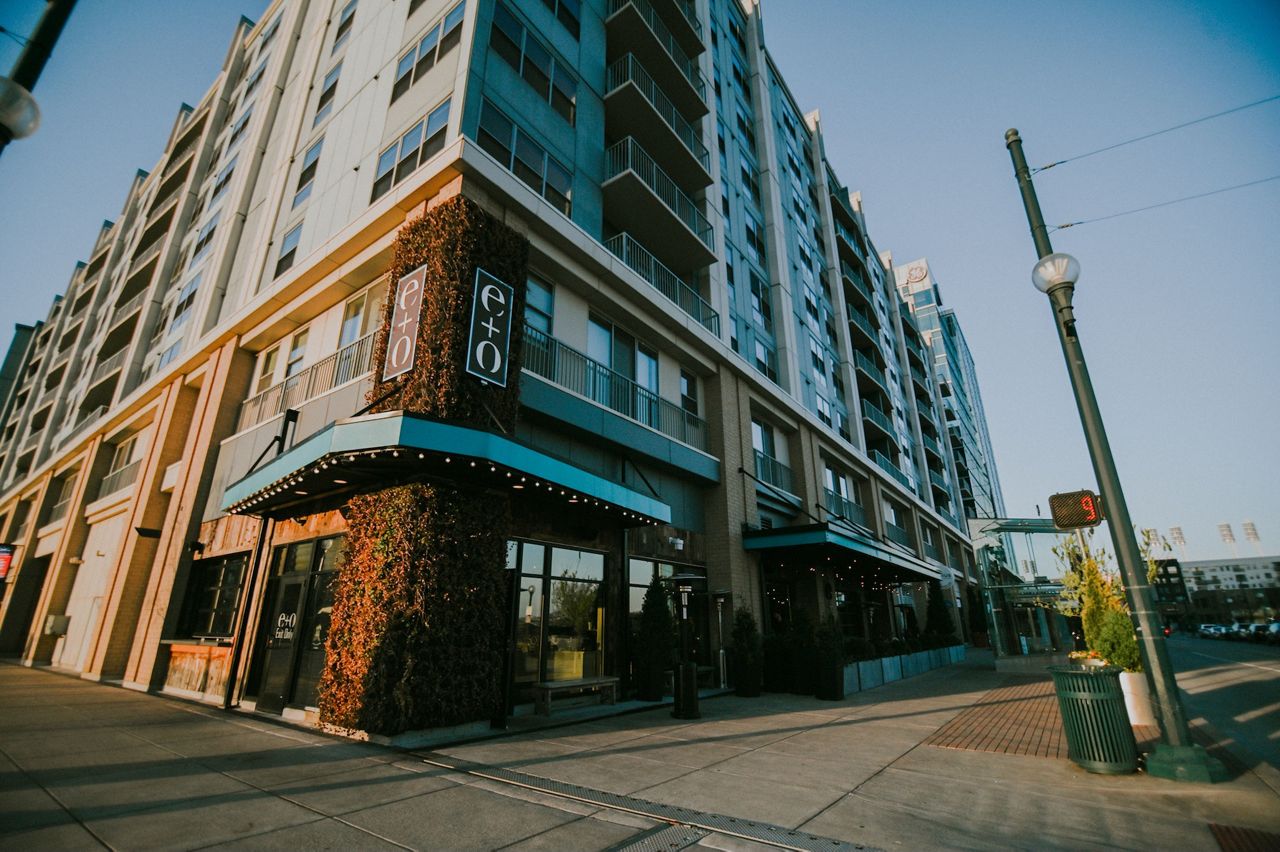 The E+O team prepared for a “raucous” weekend and it lived up to the hype, he said, calling it one of the most “hectic weekends” he can remember downtown.

But despite the extra foot traffic at and around The Banks, Castelli said E+O saw little benefit from it, if any at all. The restaurant had more than 100 cancellations on Saturday, he added.

While it could have been “just one of those weekends” or diner preferences, Castelli thinks logistics and planning challenges played a role in the restaurant’s slower-than-expected business.

“While we are always pleased when the city is buzzing, last weekend actually resulted in a rare decrease in business for E+O,” he said. “Unlike exciting weekends centered around Bengals games or big concerts, last weekend, private vendors lined Freedom Way, making it more difficult for restaurants to make themselves known to the thousands walking The Banks.”

Castelli also noted that part of Race Street being shut down to store “grease traps, dumpsters and port-a-potties” led to E+O Kitchen at the Banks becoming effectively “blockaded.”

“The hundreds of guests who planned to join us regardless of the weekend’s program voiced their discontent with parking and overall semantics,” he said. “We did our best to help alleviate these problems, but it’s always difficult when well-meaning outside events dissuade potential guests from making the trip to dine with us at The Banks.”

Despite the success of the weekend, there were also a fair number of operational challenges. Those ranged from intense traffic to exit downtown on Saturday to crowd control.

After 11 p.m. Saturday night, a “loud bang” heard downtown sent hundreds of people gathered along Fifth Street and in Fountain Square fleeing on foot, according to the Cincinnati Police Department.

Multiple Cincinnati police officers were near West Fifth Street between Vine and Walnut working the Cincy Soul food festival when they heard the sound, which Sgt. Anthony Mitchell described it as “startling.”

The original police radio broadcast described it as a shooting at Fountain Square, Mitchell said. After further investigation, CPD said it found no victim, or any evidence of a shooting. 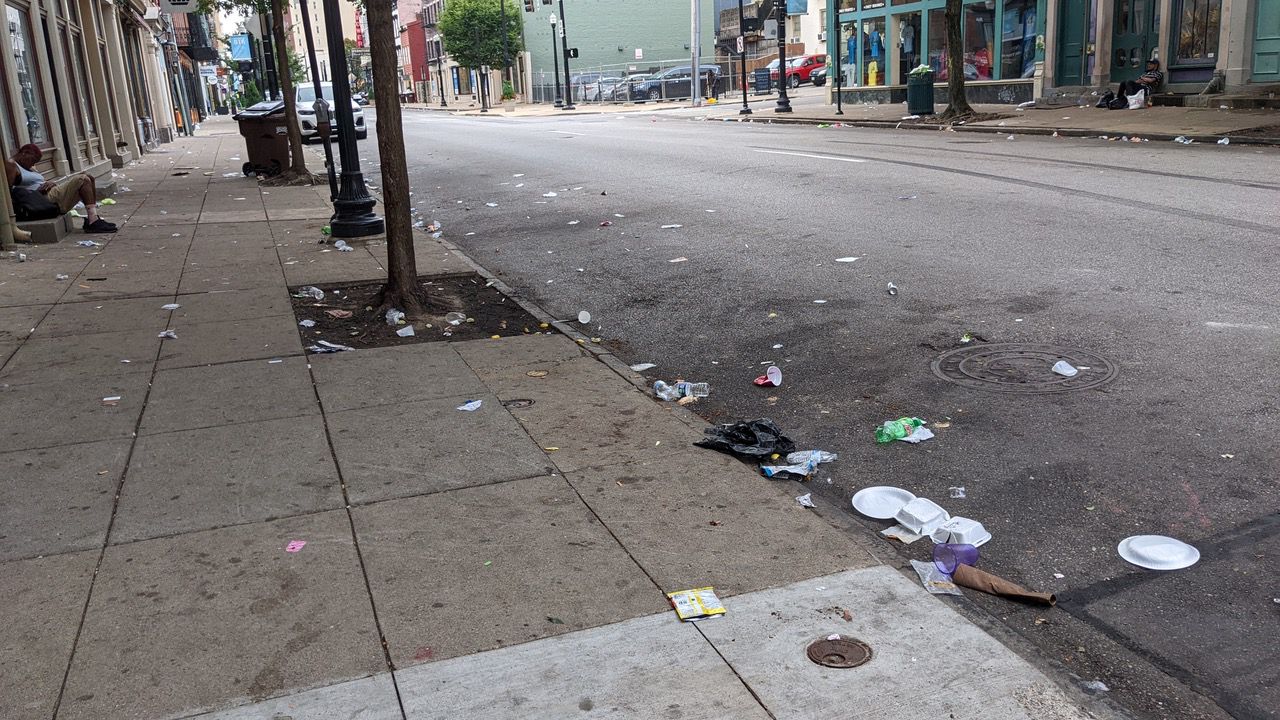 Several people suffered injuries because of the incident. Most hurt themselves while running or got stepped on by others, Mitchell said. One person suffered a seizure and another heart attack, CPD said. The police department didn’t release the conditions of those individuals.

People were still on the square at the time because 3CDC’s event had just wrapped up and Cincy Soul, which 3CDC didn’t staff, was still ongoing, Rudemiller said.

CPD cleared the square and surrounding area that evening. But the square was back open and operating at normal hours Sunday.

Other issues included immense traffic throughout parts of downtown and OTR on Saturday that led CPD to shut down several streets. The following day, litter and debris, such as discarded alcohol containers, covered Main Street.

Kearney acknowledged that there may be room for improvements next year and for future major event weekends. But overall, she thinks the city “held up pretty well.”

“Late Saturday night, there was a little bit of a traffic glitch. No one really complained, but we could do better,” she said.

She added the team is already in discussions about the event to prepare for next year’s Cincinnati Music Festival.