CINCINNATI — The Cincinnati Police Department is looking for someone who stole a prominent piece of a statue given to the City of Cincinnati by Italian dictator Benito Mussolini.

A person walking through Eden Park on Friday morning noticed the wolf from the Capitoline Wolf Statue was missing, according to CPD. That same person told CPD investigators they had seen the statue intact while on a walk Thursday.

The wolf makes up the major piece of bronze statue. It appears the perpetrator cut the statue at the wolf’s paws, which remain attached to the marble base.

The rest of the statue did not appear to be damaged.

Cincinnati Parks, a city department, is working to get a valuation of the statue, according to spokesperson Rocky Merz. He said the primary focus is finding those responsible and recovering the statue.

“We were shocked The Capitoline Wolf was stolen from Eden Park overnight,” Cincinnati Parks wrote in a statement. “Public art belongs to the entire city for the enjoyment of all, and we appreciate the response from the Cincinnati Police and ask anyone with knowledge to help and to report it.” 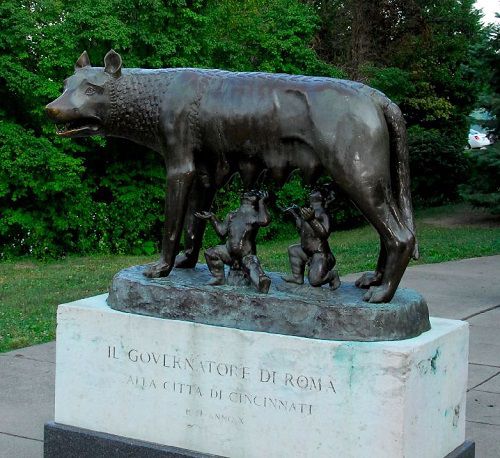 The Capitoline Wolf before being vandalized and stolen. (Photo courtesy of Cincinnati Parks)

The Capitoline Wolf statue is in the Twin Lakes area of Eden Park, overlooking the Ohio River. The piece depicts the Roman myth of a mother wolf nursing the infants, Romulus and Remus.

It’s a replica of the ancient Etruscan statue on the Capitoline Hill in Rome. It was a gift arranged by the Sons of Italy to honor the Roman general Cincinnatus, who served as inspiration for Cincinnati’s name.

The statue is inscribed with “Anno X,” which translates to the year 1931, a reference to the 10th year of Mussolini’s reign.

Over the years, the origins of the statue have led to disagreements about the appropriateness of it being a city park because of its ties to Mussolini, a fascist ruler who sided with the Nazis and Japan during World War II.

Chris Seelbach, then a Cincinnati City Council member, initially supported the idea of removing the statue.

“Statues from the monster that was Benito Mussolini don’t belong in our parks. Museums? Maybe. But not Cincinnati Parks,” Seelbach tweeted in Jan. 2020. “I’m drafting legislation tomorrow to have the statue permanently removed.”

Seelbach ultimately pulled back and instead had conversations about the statue before deciding. Neither he nor any other member of the city council took action.