Photo: Courtesy of The Baker’s Table

The Baker’s Table opened to rave reviews back in late 2018.

If you live north of the Ohio River, the plentitude of chef-driven restaurants makes it easy to dine in Cincinnati and not venture far afield.  We have convenient access to meals from kitchens helmed by the likes of Jose Salazar, Jean-Robert de Cavel, Vanessa Miller and Josh Campbell, to name just a few favorites. What attracted me to dinner at The Baker’s Table in Newport was the chance to hear a jazz duo that plays a regular Sunday gig there. To my surprise and delight, the meal turned into one of my top dining experiences this year.

I had enjoyed dinner at The Baker’s Table a couple of times before COVID-19 upended everything. The talent behind the establishment deserved wide attention from its opening day in late 2018, but it didn’t seem like an essential destination, given all the more accessible options closer to my Clifton home. Now, however, I think it may be one of the very best restaurants in the region, worthy of frequent visits.

Owners Dave Willocks and Wendy Braun have made a few crucial changes since the 2020 early-pandemic days and subsequent shrinkage of the restaurant world. They switched from day and evening service to dinners only and moved from an a la carte menu to a fixed-price menu. They also opened a fast/casual place across the street, The Baker’s Table Bakery and Pizza. As we move – however cautiously – out of pandemic mode, Willocks says that these efforts have paid off, creating a more thriving, stable business. The result for diners is evident not only in the delicious food but also in seamless, attentive but unobtrusive service.

The utility of having a separate bakery increasingly made sense after the restrictions imposed by COVID-19, Willocks says. After all, the importance of bread and other baked goods to the mission of the restaurant is clear from the name they chose. Willocks says that they have never bought a loaf of bread, pie crust or even crackers from another purveyor. When the restaurant closed and then reopened at reduced capacity in 2020, he realized that they needed more baking capacity. Although the bakery seats only 30, it’s also set up for easy carry-out, not only for bread and other baked goods but also for a selection of 12-inch pizzas now offered several nights a week.

As with most full-service restaurants, Saturday dinner is the busiest meal at The Baker’s Table. Sundays are special, though, with live music during dinner service and brunch at the bakery 10:30 a.m.-1:30 p.m. I’ve visited the bakery just for coffee and scones or cookies, not yet for brunch or pizza. But I can enthusiastically recommend Sunday dinner at the restaurant.

The Baker’s Table Bakery and Pizza serves brunch on Sundays.

On top of his expertise as a chef, Willocks is an accomplished musician with a degree in jazz guitar. Almost as soon as The Baker’s Table added dinner service, in 2019, he brought in musical entertainment. One night, Phil DeGreg substituted for another act and told Willocks he would love to have a regular gig at The Baker’s Table. Now you can catch DeGreg and his partner, bass player Aaron Jacobs, most Sundays starting at 5:30 p.m.

Patrons can thank co-owner Braun for the congenial environment of both the restaurant’s dining room and the bakery and café. Her design skills are evident in myriad ways, such as how the bakery allows customers to watch the staff as they craft loaves, pizzas, scones and other pastries for the big ovens. The main dining room of The Baker’s Table couldn’t be more inviting, with well-spaced tables and spot-on décor.

As pleasant as it is to listen to the live music in the lovely ambiance of the restaurant, the experience gets even better thanks to the wonderful food coming out of the kitchen. Willocks started as a chef in California before moving to Newport and had the good fortune to work with Jose Salazar at both Mita’s and Salazar’s. He reveres Salazar as “a meticulous teacher” who helped him develop skills as a chef.  In fall 2020 when most of the COVID restrictions had been lifted, Willocks and Braun hired a young chef de cuisine, Porter Lewis. Willocks describes Lewis as a gifted butcher, wonderfully creative with pasta, and as having the same approach to produce as he does: “We let what comes from the farm drive the menu.”

Willocks and Lewis “rewrite the menu every week,” Willocks says, so your choices will be different from those my date and I had a couple of weeks ago.  You’ll select either two or three courses, prix fixe ($48 or $66), from menu sections labeled Beginnings, Pasta, and Mains, with Desserts priced separately. The Beginnings tend to be variations on salads but can also include hot dishes; my Braised Spring Greens was just that, spring on a plate, served warm. We skipped the pasta and went for Mains. I had Ocean Trout with Carolina Gold rice (always an enticing ingredient) and he enjoyed a dish based on lamb sausage and farro. Two weeks later, the trout was still on the menu but the lamb had been replaced by a duck preparation that sounded just as inviting.

A sign above the front door announces “Rustic Seasonal Cuisine.” Willocks elaborates on the term “rustic,” saying, “We draw our inspiration from old-world, handcrafted culinary traditions. We don’t use modern gastronomical techniques or technology — or even plastic wrap — and the plating presentation is intended to be simple and natural. The goal is to let the ingredients speak for themselves, instead of being complicated by a lot of fussy technique.”

I love the bit about not using plastic wrap. 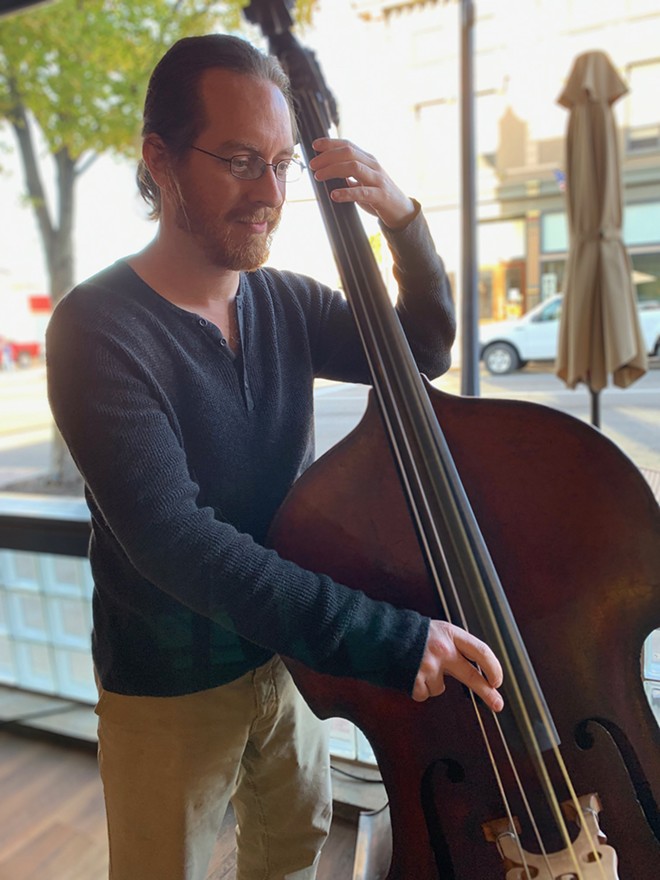 Photo: Courtesy of The Baker’s Table

The musicians seem to appreciate the place as much as diners do. Bassist Jacobs says this is his favorite gig, and pianist DeGreg agrees, mentioning the great meal they get after they’ve played. “It’s a very friendly place,” DeGreg adds, “with no stodginess and a very low-key, relaxed atmosphere.”

The Baker’s Table serves dinner Thursday-Saturday. The bakery/café is open for coffee, pastries and lunch Wednesday-Sunday and reopens for pizza service 5-9 p.m. on those evenings.