WALTON, Ky. — The baby formula shortage in the United States continues to be a burden on families trying to keep their babies fed. In Kentucky, the out-of-stock rate continues to climb, creating desperation for many, including a new mother in northern Kentucky.

She and others are continuing to search far and wide for this suddenly rare commodity.

Since giving birth to her daughter Iris in February, first-time mother Ines Palacio has experienced the bliss of loving someone more than she ever knew she could.

“It’s been amazing. I try to absorb every second that I get with her, because they grow up so fast, in the blink of an eye. Being a mom is a gift from God,” Palacio said.

However, she’s also experienced overwhelming stress caused by a crisis she never could’ve expected so soon into parenthood.

Ines Palacio holds up some of the few baby formula containers she’s been able to find. (Spectrum News 1/Sam Knef)

“It was getting limited, so I started noticing maybe a month and a half ago. I was like OK, maybe they’re restocking something,” Palacio said of the baby formula supply at stores. “Then it started getting more and more, like everything was just vacant, like all the shelves.”

Palacio is supplementing breastfeeding with baby formula—or at least she’s trying to.

“This one has an ingredient in it that worries me a little bit,” she said, holding up one of the rare containers of formula she’s been able to obtain.

Formula has become increasingly difficult to find in stores, or anywhere else. And a recent return to work has pushed the issue even more for Palacio.

“Unfortunately, this country doesn’t cater to breastfeeding moms very much. And my leave was short,” she said. “It’s really scary, because it takes a lot of discipline to breastfeed, and with me being at work, it’s hard.”

Trying to supplement has been a challenge with empty formula shelves. Palacio said her baby does well with one certain brand, but as is the case for many moms, desperate times have called for desperate measures. She’s had to search online, including overseas websites.

Her own mother recently traveled to Canada and brought some formula back. Baby Iris didn’t respond well.

“It was bad. I mean, she had side effects. Vomiting, a lot of colics and diarrhea,” Palacio said. “It’s been really, really challenging to say the least, and really scary as a young first time mom.”

Completely relying on formula, like many mothers do, is something Palacio said she couldn’t even imagine given the challenges she’s faced just using it as a supplement.

A quick search on social media will show countless families desperately searching for formula—that’s not ridiculously priced—to feed their babies.

Having moved to Kentucky with her family from France when she was ten years old, Palacio said she brought with her a sense of optimism that’s now being put to the test.

“It makes you wonder how one of the most modern nations in the world is dealing with this issue and isn’t able to resolve it quickly,” she said. “It is scary, because when we’re dealing with these recalls, you’re giving your child something that could potentially be faulty.” 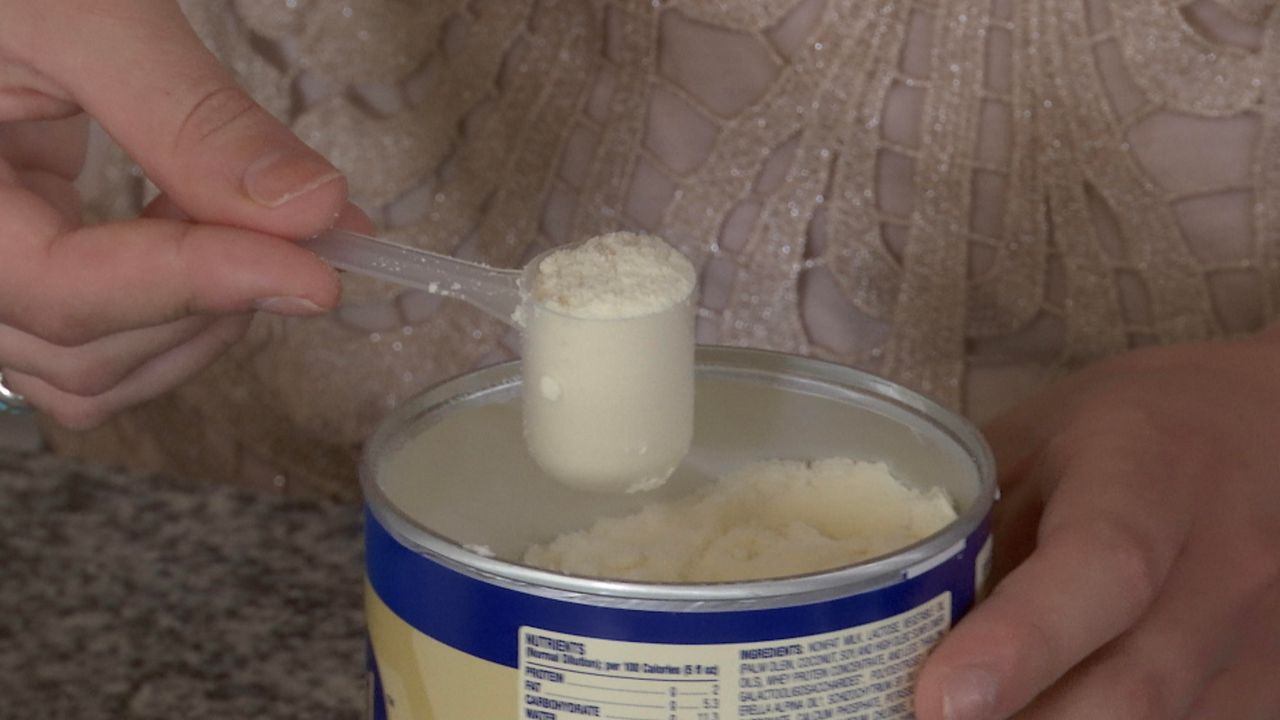 Ines Palacio has had to resort to using formulas that aren’t ideal for her baby. (Spectrum News 1/Sam Knef)

According to retail data firm Datasembly, in mid-May, Kentucky’s out-of-stock rate for baby formula reached 75%, which was in line with national numbers. Abbott Laboratories, which issued a major formula recall in February, agreed with the FDA to reopen its plant last month.

Gov. Andy Beshear said in late May he expected to see a boost in formula stock for Kentucky in the coming weeks. But moms like Palacio can’t feed their babies optimism.

“It’s about whether my daughter will have her next meal. And that’s kind of scary, because she can’t have cow’s milk yet. Their immune system is pretty vulnerable,” she said.