SUMMIT COUNTY, Ohio — After decades of drawing families to the lakes, Summit Metro Parks has ended swimming for good at two of its parks. But the park system said there’s still plenty to do, with new trails already in the works and free music concerts planned throughout the summer.

Out of 16 parks, the two were the only Metro Parks locations with swimming — Munroe Falls since 1978 and Silver Creek since 1994. But attendance has been on a slow decline at both lakes for years, she said.

Despite Metro Parks’ marketing efforts to draw people back to the lakes to swim, including offering free swim days, attendance had diminished to about one-quarter of what it was in 1995, she said.

Swimming attendance had diminished to about one-quarter of what it was in 1995. (Courtesy of Summit Metro Parks)

“When we surveyed the public, a lot of statistics were showing us that there was a big push toward swimming in chlorinated pools,” she said, with people opting for public and backyard pools. “And you can really see that, too, with statistics showing the sales of pool equipment, so I would say that was definitely a big thing.”

“Fifty years ago, going to a swim lake in the summer was the place to be,” the blog reads.

Other factors in making the decision to close the lakes to swimming were staffing challenges and water-quality concerns, Merrick said.

Both lakes remain open for fishing and boating, and Silver Creek’s paddle boats will be up and running, she said. Silver Creek also has the Metro Parks only bridle trails, as well as hiking trails, archery, a disc golf course and a cross-country course. 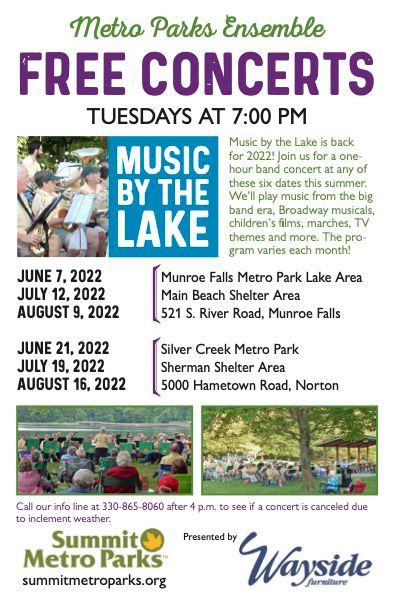 The Metro Parks Ensemble will offer free concerts at both parks through August. (Courtesy of Summit Metro Parks)

Munroe Falls also offers fishing and boating, along with hiking trails, a soccer field and tennis, basketball and volleyball courts.

Feedback from the community showed people want more of the other activities the parks offer, she said, so construction is planned to begin this year to extend the trails at both Silver Creek and Munroe Falls parks.

“When we put out polls, we were seeing that people are still visiting those parks quite often, even throughout the pandemic. They’re just using them in different ways,” she said.

The Metro Parks Ensemble also returns after being furloughed for the past two years, she said. The ensemble will perform free concerts by the lakes, which are planned through August.

“The ensemble will be performing at both parks and every concert is different,” Merrick said. “So, we absolutely invite families to bring some chairs and blankets and enjoy a free concert.”

More amenities could be in the works, as Summit Metro Parks’ master planning process is underway, she said.