FC Cincinnati did not dominate Saturday’s match against the Chicago Fire. Far from it. The Fire controlled possession throughout and, just looking at the boxscore, ended up with the better chances. The Fire finished the match with 61% possession and racked up eighteen shots to the Orange and Blue’s nine. However, FCC put itself in a position to get a result. Those 18 shots by the Fire combined for just 1.48 expected goals per MLS Soccer.

Though FCC generally limited the Fire’s chances, defending deep in its own box led to a lot of set pieces. The Fire’s goal, a header by Jhon Duran, came on one of Chicago’s 14 corners on the night. In his post-game press conference, manager Pat Noonan said of the corners conceded, “I thought we defended those outstanding, but when you take on, I don’t know what it was, [14] corners, you’re bound to get picked off on one of them, and they found the goal there.”

FCC only conceded four shots, combining for 0.597 xG, immediately following Chicago set pieces. So even though Chicago scored on one, Cincy did a good job limiting the quality of chances from the Fire’s set-pieces throughout the match.

In addition to defending set-pieces well, the Orange and Blue also forced the Fire into taking low-percentage shots from range. Nine of the Fire’s 18 shots came from 20 or more yards from goal, according to Football Reference. Of the Fire’s nine shots from 18-yards or closer, just five were from open play and only one forced a save from Roman Celentano.

After the game, Noonan said, “But our defensive mentality is excellent, we’re still not sharp enough with the ball. And that’s what’s having us grind out these results in ways where we can’t really create enough late in games to be able to play higher up the field and look for some late goals.” On a day when much of FCC’s attacking play broke down because of slightly misplaced passes or heavy touches, its defensive solidity kept the team in the match. With the help of two huge mistakes by the Fire, the Orange and Blue left the Windy City with all three points and a club-record winning streak in MLS.

Nick Hagglund has impressed at center back during Noonan’s first season in charge. He’s played as part of a three-man center backline in the 5-2-1-2 formations and as one half of a pairing when Noonan opts for a four-man backline. Whatever the formation, Hagglund has been a reliable defender.

Against the Fire, Hagglund was in his element. Imperious seems like a word that’s overused by British accented soccer broadcasters but it was a fitting description of Hagglund on Saturday. He dominated in the air, winning 6 of 10 aerial duels, and finished the match with 12 clearances and six interceptions.

In a game where FCC was largely pinned in its defensive third and faced a lot of set pieces, Hagglund was a major reason why Chicago didn’t create much in the way of scoring opportunities. His ability to win the ball in the air stymied the Fire and kept FCC in a position to take all three points.

Hagglund looks more confident when Cincinnati has the ball, as well. On Saturday, he completed 31 of 34 passes including 16 of 17 passes between 15 and 30 yards and seven of nine passes traveling more than 30 yards. Nick’s role in possession is not going to be consistently hitting line-breaking passes but his ability to play fast, keep the ball moving, and hit diagonal switches when available. This helps FCC break the opponent’s pressure and get the ball into more dangerous areas. 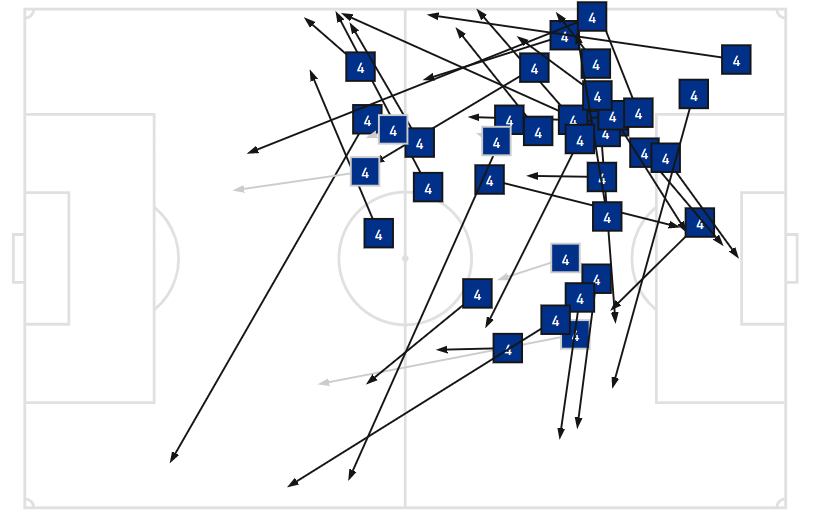 Not to say that Hagglund can’t drop dimes on occasion. After all, Hagglund started one of the Orange and Blue’s most dangerous counterattacks on Saturday with a great one-time pass. In the 55th minute, Gaga Slonina played a long ball while under pressure from Brandon Vazquez. Junior Moreno claimed the second ball and passed back to Hagglund, who hit a pass on his first touch to Lucho Acosta in the attacking third, bypassing Chicago’s front line and midfield. The play ended without a shot as Slonina parried away Alvaro Barreal’s pass to Vazquez, but Hagglund’s inch-perfect pass put FCC in a dangerous position.