COLUMBUS, Ohio — Most Americans have received at least two vaccine doses, and many people are going on three or four, but some Johnson & Johnson recipients who were sold on a “one and done” vaccine are sticking with a single dose.

Columbus resident John Meekins, 53, said it can be a hassle to get vaccines, so he is glad he is still considered fully vaccinated for work purposes with just the one dose he got last year.

“The biggest reason I got the J&J is because I just happened to show up at the VA one day for some health care, and they had like a walk up, no wait, no sign up, and then I didn’t have to go back, so the single dose was the biggest reason. Like, purely convenience is why I went with it,” he said.

Meekins said he isn’t too familiar with the booster recommendations, but he said he feels he’s young enough that he doesn’t need any more shots, and he doesn’t want to take additional vaccines beyond what’s required for his job.

“If it came down to you either get a booster or quit your job or something, I mean, I make really good money now, so I would go get the booster, but if I was making 10 bucks an hour and somebody said, ‘Go get the booster or get fired,’ I’d just go somewhere else where it wasn’t required,” he said.

Since May 5, most Americans have been advised against getting J&J shots. Citing the risk of rare but potentially fatal blood clotting complications, the Food and Drug Administration strictly limited the authorized use of the vaccine to people who cannot get an mRNA vaccine or who would otherwise not get vaccinated.

The move came more than a year after the FDA placed a 10-day pause on the vaccine due to blood clot concerns, which happened in mid-April 2021, a month and a half after administration of the vaccine began. Around the time of the pause, health care providers received guidance on treatment methods for the rare blood clot events — thrombosis with thrombocytopenia syndrome.

Askia Muhammad Toure, 38, of Columbus, said he remembered the April 2021 pause being somewhat startling as it came a few days after he got J&J, but he wasn’t too concerned after reading into it because the adverse events are rare.

Governors, including Ohio Gov. Mike DeWine, opposed the pause, arguing the move slowed the vaccination effort because some people strongly preferred a single-dose option, and claiming it contributed to vaccine hesitancy toward all three shots. For some Ohio residents, the blood clotting issue increased their distrust of the pharmaceutical giant, which had also discontinued its baby powder in 2020 amid lawsuits alleging the product was associated with cancer risk.

Now that the FDA has strictly limited the vaccine, Toure said he wouldn’t get another J&J dose, but he doesn’t regret the decision he made at the time. He said it was easy as a “one and done” deal, and he was fully vaccinated in two weeks. He got a Moderna booster in November.

“I know that if you can get something other than the J&J, they recommend that you do that. I don’t have a problem with that recommendation. If I was just now wanting to get vaccinated or get some immunity, I would follow that,” he said.

“It’s not like we’re talking about something that would have been easily picked up in a clinical trial. These were large clinical trials that were done. This rare side effect wasn’t seen,” he said. “The point the FDA and CDC are making is, because there are alternatives that don’t have this, people should consider getting one of those instead.”

Vaccine trials and real-world data demonstrated that the J&J vaccine hasn’t been as effective as the Pfizer and Moderna vaccines, which led some recipients to call for the acceleration of booster approval prior to the fall booster authorizations.

When Meekins got COVID-19 in January, he said his symptoms were mild and short-lasting. He said the single J&J dose might have helped him, but he isn’t particularly confident in the efficacy of COVID-19 vaccines.

“I know people that have had two boosters and they still got omicron,” he said. “And so it’s like, if I had got the polio vaccine, and I got three boosters in a year, and I still got polio, I’d have been like, ‘Okay, hey, what’s up with this?’”

In the fall, the FDA approved boosters for J&J recipients, with the option to get an mRNA vaccine. In December, the Centers for Disease Control and Prevention changed its guidance to recommend the mRNA COVID-19 vaccines over J&J. Then in March, the CDC said all adult J&J recipients could get a second mRNA booster four months after their first, citing data showing J&J was less effective. For the other two vaccines, second boosters are only available to people who are 50 and older or are high risk. 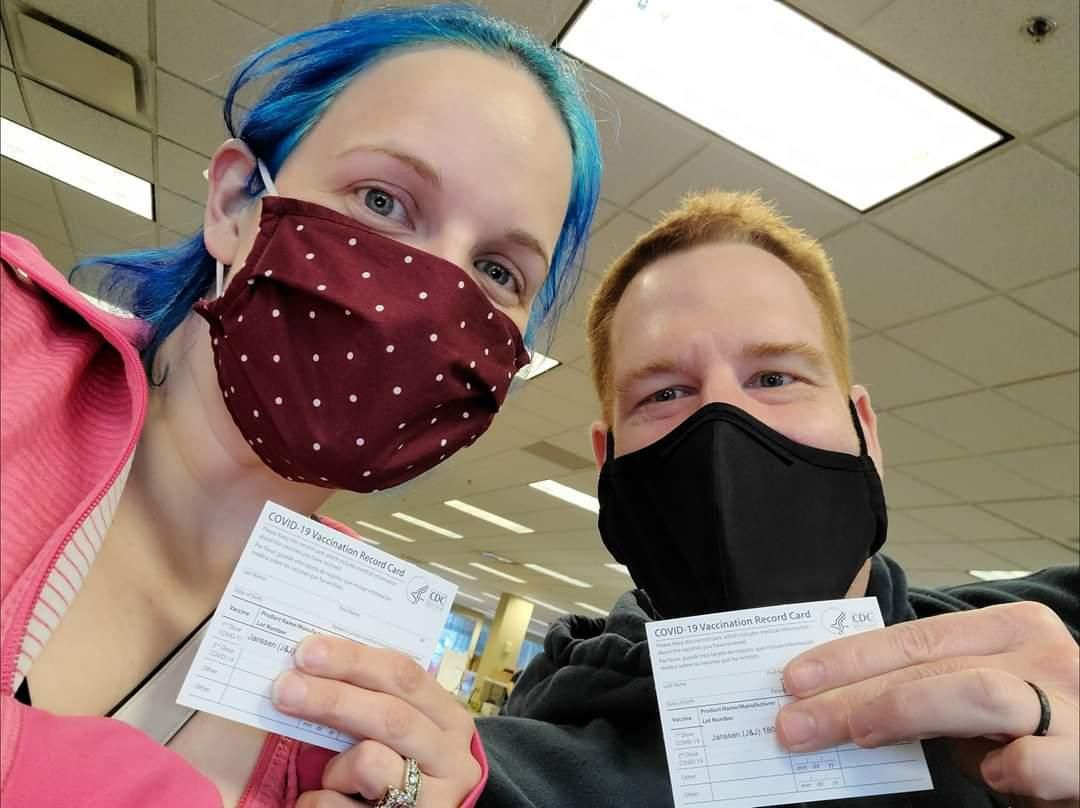 J&J recipient Gabe Howard, 45, said he talked with a pharmacist about getting an mRNA booster even before they were approved because he was concerned about the level of protection from just one dose.

“He said, ‘Don’t mess with that.’ He said, ‘It’s very dangerous. You are not a doctor. You are not a pharmacist, do not do this, but I understand your fear. Just wait,’” Howard said.

Howard and his wife originally got J&J in April 2021 because it was the quickest path to being fully vaccinated to see his grandparents, and because he’s not too fond of needles. Ultimately, he got a Pfizer booster in the fall.

While Howard agrees with the decision to limit the use of the vaccine, he said the blood clots are not of high concern to him because he is more worried about the disease.

“I don’t want to die, but if I’m playing the odds, COVID has a significantly higher chance of killing me than any issue that the vaccines, including J&J, have ever come up with,” he said. “I’m sad that people see this as proof that this is a reason to avoid the vaccines.”