BEAVERCREEK, Ohio — In the growing suburb of Beavercreek, Wartinger Park has served as a time capsule. Its barns and cabins, dating back to the mid-1800s, give visitors a glimpse into to city’s roots, though since 2019, a piece has been missing.

Now, on the third anniversary of the tornado that destroyed it, the Wartinger Park Barn is just a few weeks away from welcoming back visitors.

The destruction of Wartinger Barn in 2019

On the evening of Memorial Day, May 27, 2019 and into the next morning, a series of tornadoes ripped through the Dayton area, killing two people and created an estimated $1 billion in damage.

In Beavercreek, an EF-3 tornado tore through the northern part of town, damaging several homes and businesses and destroying the Tobias-Zimmer barn at Wartinger park.

“All three of the walls basically crashed in on themselves,” Parks Superintendent Kim Farrell said. “It really took the brunt of the damage.”

A donation from the Zimmer family the barn was built in 1858 as a typical facility for threshing and storing grain.

Farrell said by the time the tornado blew through, little was left of the original structure, but most of the surrounding historic buildings were undamaged.

As the city worked to clean up, Farrell said the parks department asked the community what they’d like to see built in its place.

“It could be anything,” she said. “But by popular demand, the community wanted to see the barn come back.” 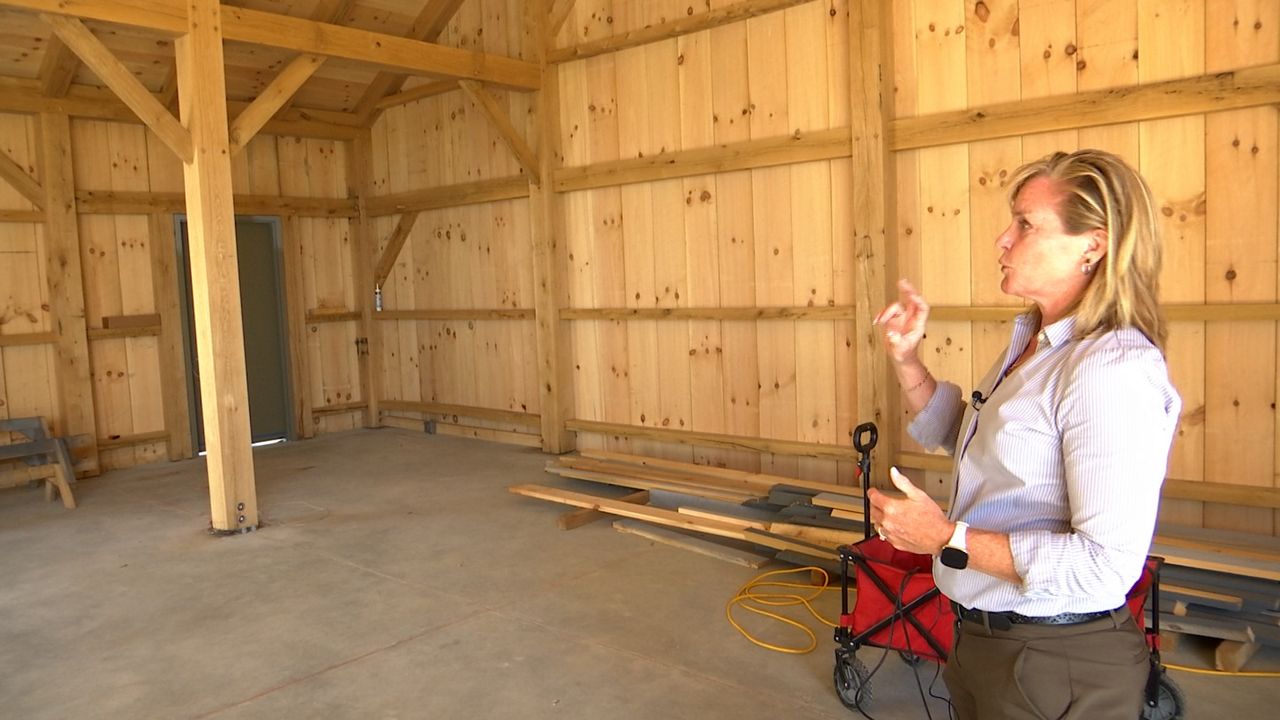 Farrell shows the interior of the replica barn

Farrell said that’s when her department got to work, partnering with the historical society to design and rebuild an exact replica, using the same technology.

“Instead of hammers and nails, these pins are what holds all the beams together,” she said, showing some of the pegs visible inside of the structure. “Pretty much like your Lincoln Logs.”

Insurance covered the costs of construction so once the design was finalized and the materials arrived, Farrell said it took a matter of weeks to make the replica recognizable.

“I can’t believe how quickly it’s gone up,” she said.

As of late May, the project’s roof and siding are complet.  Farrell said the last major projects will be installing the electrical and lighting system as well as a few aesthetic features. To preserve its historical value, Farrell said one of the walls will display some of the original wood and tools from the 1850s.

Beavercreek hopes to have the barn open for events by mid-summer.

“To have it for a family reunion, a birthday party, anything like that. I know years ago a couple was married here so every fall they come back and have their anniversary party,” Farrell said “It’s kind of the gem of the community I would say.”