Looking for the best trails to bike this summer? We asked Wade Johnston, director of local bikeway advocacy group Tri-State Trails, for his recommendations. His six picks — and reasons why — are below.

“If you’ve never been to the Whitewater Canal Trail, or it’s been a while since your last visit, now is the time to make the trip to Franklin County. After years of dedication by a small group of volunteers, the trail recently built some significant connections. What used to be three noncontiguous trail segments has now connected into a cohesive 11-mile trail spanning from the Laurel Fedder Dam almost all the way to downtown Brookville. This scenic corridor traverses through historic downtown Metamora and features memorable locks from the former Whitewater Canal.” 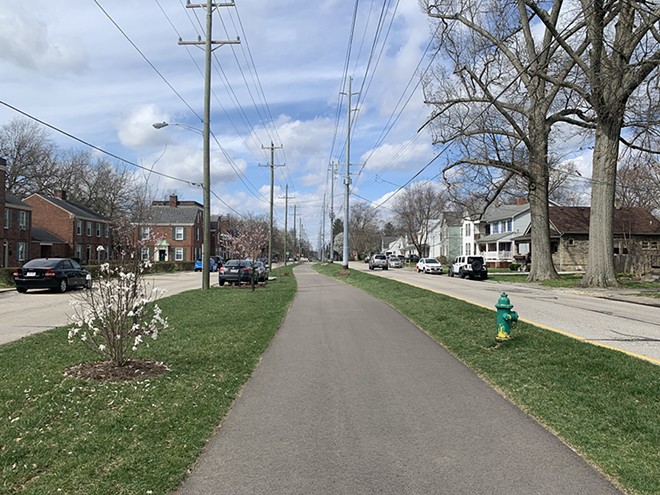 “The recent extension of Wasson Way through the treetops of Ault Park is a must see. This east-west corridor of the planned CROWN 34-mile urban trail loop now spans roughly 6 miles and connects to downtown Mariemont via the Murray Path. There is a short on-road segment near the switchback in Ault Park that follows Old Red Bank Road and Woodland Drive to connect the two trails. Stay tuned for some exciting news about the extension to the Little Miami Scenic Trail later this year!”

“Last year, a key gap between Middletown and Franklin was closed, after nearly a decade of effort. You can now ride roughly 65 miles from Middletown through Dayton to Piqua, which is a big deal! We’re working with MetroParks of Butler County and Great Miami Riverway to link up this regional corridor to another 11 miles of the GMRT in Hamilton and Fairfield Township sometime in the foreseeable future.” 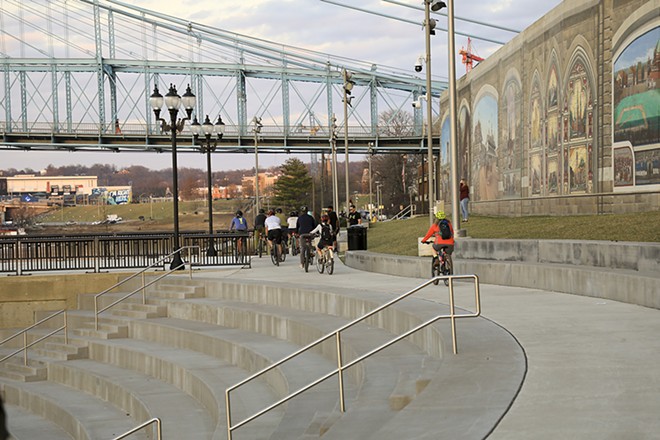 “Covington’s riverfront got a makeover last year with a new amphitheater and improved trail alignment west of the Roebling Bridge. On top of that, Covington recently extended the trail’s western terminus to Swain Court, which drastically improves biking to West Covington and Ludlow, as well as featuring a spectacular riverfront view of Cincinnati. While the trail doesn’t perfectly connect to Newport yet for bicycling, Kentucky Transportation Cabinet is developing plans to rebuild the Fourth Street Bridge between Campbell and Kenton Counties. This is an important project for interested riders to advocate for a better design with a high-quality bikeway between Newport and Covington.”

“Cincinnati is doing its part to advance the regional vision for the Ohio River Way between Portsmouth and Louisville by building out new connections in the Ohio River Trail. Last year, a critical link between Lunken Airport and Coney Island was completed. This eastern leg of the CROWN extends roughly 7 miles from Schmidt Field in East End to Kellogg Park in Anderson Township with one on-road section through the riverfront street grid of California. On the West Side, a new section of the Ohio River Trail West is almost finished from Fairbanks Avenue in Sedamsville to Gilday/Riverside Park.”

“I’d be remiss if I didn’t mention the Little Miami Scenic Trail, also lovingly referred to as the Loveland Bike Trail.  Unfortunately, a key stretch of this trail will be closed through December for the construction of a new bridge at King Ave./Grandin Road near Cartridge Brewing. When complete, the trail will feature an improved trailhead parking lot and tunnel to bypass the road intersection. Check back on the south end of the Little Miami Scenic Trail later this summer — Great Parks of Hamilton County is scheduled to have the Beechmont Bridge complete to Lunken Airport in September.”