DAYTON, Ky. — One northern Kentucky city is trying to crack down on blight by imposing higher penalties on homeowners who don’t take care of their abandoned houses.

There are a lot of old houses in Dayton, and many people who’ve been living in them for a long time.

80-year-old Lawrence Long has been in his house on Maple Street his whole life.

Lawrence Long said he’s all for the idea of holding property owners accountable, but he hopes he isn’t fined. (Spectrum News 1/Sam Knef)

“1940 is when I was born there,” he said, pointing to the house, which had some obvious deterioration on the roof. “There’s probably four or five on this street, counting mine, that need to be repaired. I got a little too old to fix it. It’s not falling down, but it needs repair. And I understand it, so I keep up what I can keep up.”

As much as Long might think his house needs work, at least he’s living there.

The same can’t be said for other vacant houses around the city, which have become a real problem in the eyes of city officials, including City Administrator Jay Fossett. The owners of many of these houses are deceased, or have outright abandoned the properties.

Fossett said the city’s historic housing stock is one of its strengths.

“But it’s also our weakness, because if you don’t maintain that housing stock, it goes away. And it deteriorates, and it’s basically destruction by neglect,” Fossett said. “Think about it. If you bought a house, rehabbed it, and you’re next to a vacant property, how fair is that to you?” 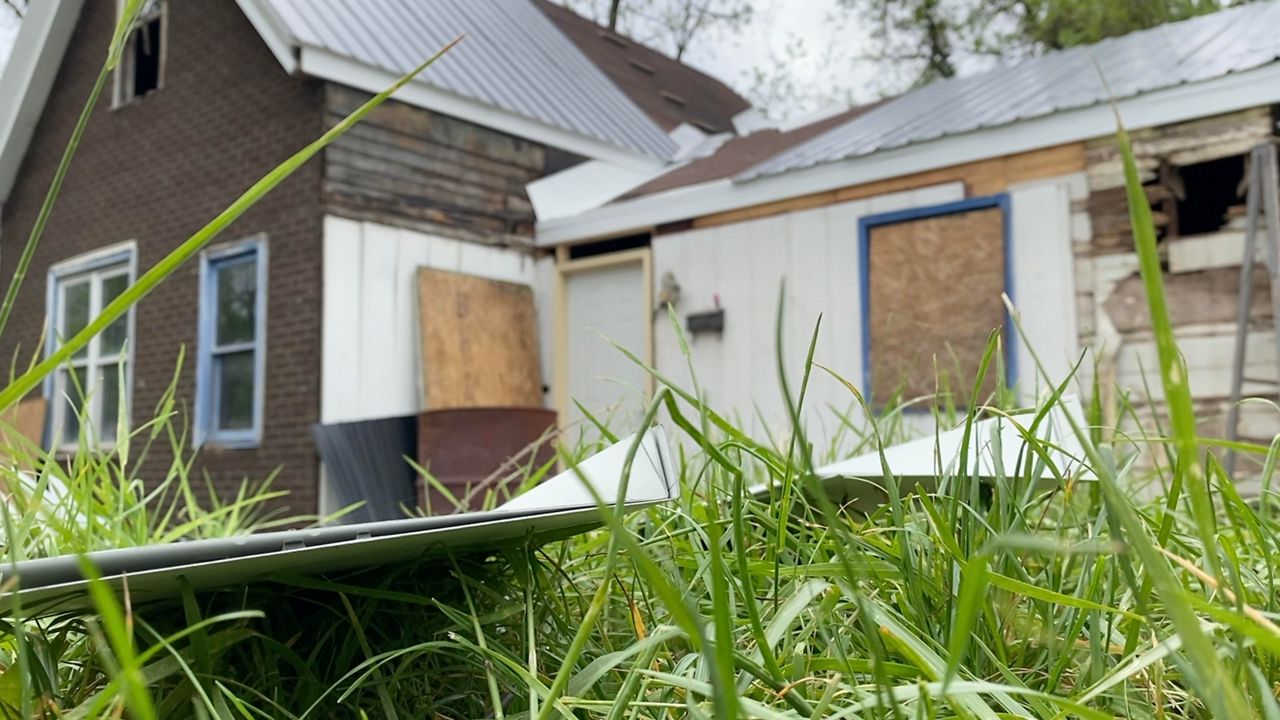 Since Fossett started in his role in March 2021, Dayton has put a major emphasis on attacking blight, even creating a top-10 list of homes to target, working hard to get the homeowners to either fix them up or sell them to someone who will. If not, the city would foreclose on the properties.

Fossett said the city has had success with all the properties on that initial list.

“They’ve either been sold, torn down, or remodeled,” he said.

Now the city is on its second top-10 list. One house on that list is directly across Maple Street from Long’s.

“There must’ve been 10 families moved into that since I was here. And I don’t know what happened last time, but I understand that it’s pretty bad. There’ve been people up there looking to buy it, and ain’t none of them bought it. It’s in that bad of shape,” Long said.

“If you have a property that has a broken window, guess what? In a few weeks, the other window’s going to be broken. Because kids or vagrants or whatever are gonna break into that property,” Fossett said. “And then the whole neighborhood starts to go downhill.”

“If you’ve got an abandoned vacant property in the city of Dayton, you’re gonna be paying $1,000 a year to maintain that property here,” Fossett said.

The city is also identifying abandoned vacant properties. In early May, Dayton passed an ordinance allowing the city to charge $50 to $100 a day, and up to $5,000 for ongoing code violations.

“We recognize there are folks that own properties, elderly folks, people of low-to-moderate income, who have difficulty repairing those properties when they get these code citations. So we are working with them. The city is looking to put together a low interest loan fund for these individuals,” Fossett said.

To qualify for that low interest loan fund program, Fossett said residents will have to own their homes and meet certain income criteria.

Long said he’s all for the idea of holding property owners accountable, he just hopes he isn’t fined.

“Hell, I’m 80 years old. I can’t climb up there and change the roof anymore,” he said. “It doesn’t bother me too much anymore, but if they buy a house, they should take care of it.”

Fossett said he thinks things will look different in Dayton in short order.

“I think in one year’s time, you’ll see the landscape has changed a lot. A lot of prominent buildings that were empty for many, many years are now either torn down or being rehabbed,” he said.

He said the feedback on more strict code enforcement has been mostly positive.

“The pushback we get is from our absentee landlords who don’t live in the city, who have these properties they’re not maintaining. They’re not happy about it. Well, that’s tough. Maintain your properties, and you won’t hear from us,” Fossett said.  “Owning property is like having children. You have a responsibility to maintain that property, just like you have a responsibility to raise your kids correctly. If you abuse them, the government’s gonna step in.”