CLEVELAND — Four high-tech buoys acting as floating laboratories are placed in central Lake Erie each May to collect data, monitor water quality and much more.

According to the Environmental Protection Agency, more than 11 million people depend on Lake Erie for drinking water, including about 3 million people in Ohio and about 1.4 million in Cleveland.

Scott Moegling, the water quality manager for Cleveland Water, looks forward to the day each year when the four smart buoys are placed in central Lake Erie to collect data on water conditions.

“They’re expensive, but they’re worth it. We’ve learned a lot of good information, and a better understanding of Lake Erie and and water quality in the water that we treat,” Moegling said. “If you’d have told me 30 years ago that I’d be looking at satellite imagery and using remote laboratories out in the lake to help me treat water, I probably would have laughed and said no way, but here we are.”

The buoys are deployed by environmental scientists from Limnotech, the water science and engineering firm which engineers the buoys. The first buoy deployed in 2010, then the next came in 2016 and two more last year.

The buoys’ gathered information is sent to an online monitoring system 24 hours a day where it is viewed by Cleveland Water staff and the public. The buoys help give the water department hours of advanced notice of a water quality issue long before the water is drawn into a treatment plant.

“By getting that extra lead time, we can not only gear up manpower, we can gear up chemicals, we can anticipate needed changes,” Moegling said. “We can increase testing and be more vigilant when we know that something may be coming at us.”

The sensors on the buoys track a variety of things including temperature, pH, turbidity, dissolved oxygen, phycocyanin, which is a blue-green algae pigment, chlorophyll, which is an algae pigment, and other things that the water department can use to identify water quality parameters they need for treatment.

The data isn’t just useful to the water department. Many other industries like fishing and boating benefit. Moegling said the National Oceanic Atmospheric Administration and the Coast Guard use the buoys’ data.

“The fishing industry, they’ll use our dissolved oxygen data and to identify where to go fish, you know, if there’s a low oxygen then the fish won’t be there,” Moegling said. “Boaters use it, the wave height, wave period, the wind speed and directions are important for boaters.” 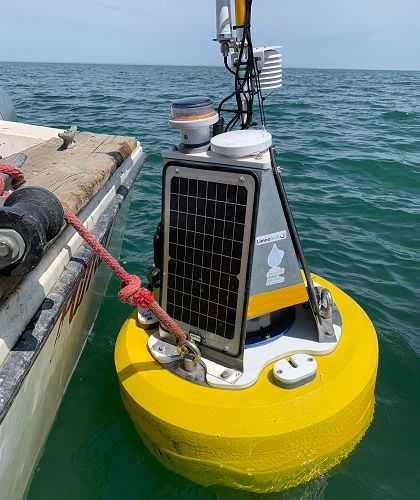 In 2021, Cleveland Water Alliance (CWA), Cleveland Water, and LimnoTech activated the Smart Lake Erie Watershed, an award-winning regional smart water monitoring network. It’s the first of it’s kind in the nation and is used to inform and improve public health, safety, utility operations, supply chain management, and water security throughout Greater Cleveland. Because of this advanced technology, Lake Erie is one of the most studied and digitally-connected bodies of freshwater on earth. Moegling said other organizations have their own smart buoys deployed on the lake as well for other reasons.

“It’s great that we have this beautiful resource right here for us to use and to enjoy and to recreate on,” Moegling said. “We’re getting a better understanding about the lake itself. Once we understand that, and understand all the complexities of the lake, then we can manage it better.”

The organization asks that people stay at least 100 feet away from the buoys, especially fishermen who are trawling behind their boats.

“Cleveland water has great treatment,” Moegling said. “We put out high quality water that meets all the regulations and then beyond. And we’re really proud of the quality of water that we’re able to put out.”

To see real-time data from the buoys, click here.