An imposter has set up a private account and has been lurking through people’s feeds (CityBeat staff included). If you don’t look too closely, it resembles the real deal except for one detail: the mayor’s actual account is @aftabpureval while the faker is @aftabpureval_ (note the sneaky underscore at the end of the tag).

But the accounts almost mirror each other. 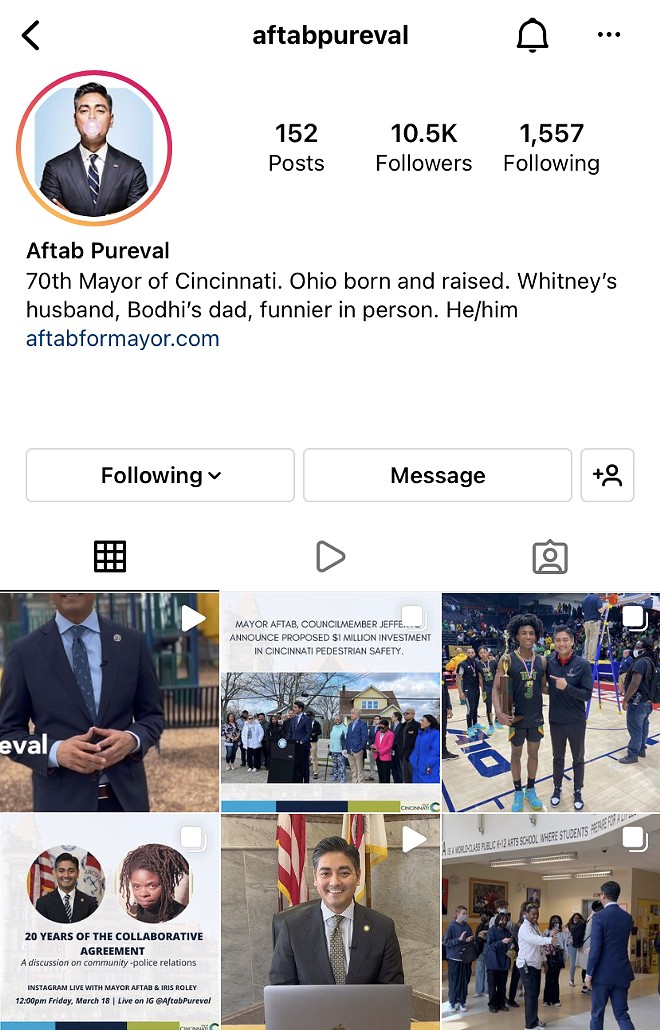 A post on the fake account from this past week features a video of Pureval asking people to vote for him. It’s a replica of a post and caption the real Pureval made in 2018 when he was running for Ohio’s 1st Congressional District.

There are also photos of Pureval standing with people and zero informative captions. And a photo posted six days ago features Pureval posing with children during a Hughes v. Taft basketball game. It’s a copy — both the photo and the caption — from a post the real Pureval made in January 2019.

The operator of the fake account has messaged new followers, sendings DMs with an enigmatic “Good day.” The real Pureval has not said whether or not he opens his messages with a similar greeting, but he did tell CityBeat via email:

So while national intelligence reports did say Russia interfered with both the 2016 and 2020 American presidential elections, could this fake Pureval account be another way to try to undermine Western democracy? Or is it just a bot who enjoys amassing followers?

Fake social media accounts are nothing new in Cincinnati. In 2016, someone made a fake Twitter profile of the Cincinnati Zoo. In 2020, a fake “Cincinnati City Council” Facebook page said Cincinnati Public Schools would be closed for the rest of the year. There’s even a fake City of Cincinnati government page on Facebook which posts commentary, but was last active in 2020. If you see an account you believe to be fraudulent on your favorite social media site, report it to the platform and to any potential victims. Instagram says it “takes safety seriously,” noting that “If someone created an Instagram account pretending to be you, you can report it to us. Make sure to provide all the requested info, including a photo of your government-issued ID.”