CINCINNATI — A collaborative effort focuses on cleaning up communities around Cincinnati to deter negative thoughts and actions.

“It starts with just picking up a bag, a pop can, you know what I’m saying,” Carrington Michael Clark said. “Each thing makes a difference.”

Clark and his family, which includes eight children, were once homeless. Now they’re working to make a difference through his initiative “Sweep The Streetz.”

“We just wanted to do something to make an impact in the community, started by picking up trash,” Clark said. “You know what I’m sayin’? We’ve been doing this since 2012 now.”

Clark’s motivation for this project goes beyond the preservation of neighborhoods. He’s lost three siblings to gun violence.

This spring, the cleanup project starts in Elmwood.

“Just very passionate about us taking accountability of our actions and leading by example,” Clark said. “I just think that all starts with just cleaning where you live.”

Cyair Clark works to clean a trash dump in Elmwood with his father’s initiative ‘Sweep The Streetz’ (Photo: Tino Bovenzi/SN1).

“It brings me joy because I just helped another person, or other people cleanup. If they can’t do it or whatever, whatever,” he said. “It really makes me happy.”

Sweep the Streetz is a program that works in collaboration with Diamondz Nda Ruff, which aims to impact youth in Cincinnati, keeping them out of trouble through various outreach efforts.

“Diamondz Nda Ruff is a community of diamonds, who was forged by the pressures of society,” Diamondz Nda Ruff President Desmond M. Brown said. “We have been through the rough and now we wanna show our good towards the community. By coming together doing some good, we’re leaving the example for the kids so they will have something to lean on.” 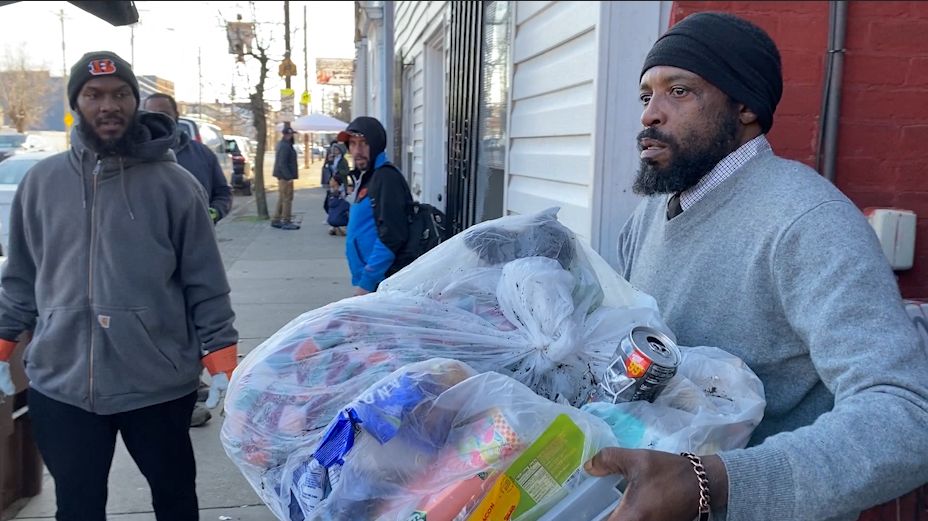 Desmond Brown carrying a box of garbage during a community cleanup in Elmwood (Photo: Tino Bovenzi/SN1).

Brown said the collaborative effort is just getting started, so many things are still in the works. He plans to involve many community-driven programs, including a video game tournament called Games Up, Guns Down that is planned to take place inside Cincinnati recreation centers and led by Brandin Jones.

“I’d rather them play the game and get in the tournament than to be out here playing ‘Call of Duty,’” Jones said. “Only people that can stop it is us.”

“We’re not scared. We have nothing to lose; we’re here to help,” Brown said. “This is a chance to fix the narrative of things that’s been going on in our city for a long time.

They hope their efforts will have a domino effect of positive action.

Taking on that challenge one mess at a time.