One Each: Still Lifes by Cézanne, Pissarro and Friends at the Cincinnati Art Museum The Cincinnati Art Museum has unveiled a new single-gallery special exhibition, organized in partnership with the Toledo Museum of Art, called One Each. Drawing inspiration from the CAM’s “Still Life with Bread and Eggs” by Paul Cézanne and the Toledo Museum of Art’s “Still Life” by Camille Pissarro, the exhibit features five simple yet masterful works of art from 1860s Impressionists that depict food and tableware. An Édouard Manet from the Art Institute of Chicago and a Frédéric Bazille from the Detroit Institute of Arts will also be on view, as will a rare early still life by Claude Monet from the National Gallery of Art in Washington, D.C. Through May 8. Free admission. 953 Eden Park Drive, Mount Adams, cincinnatiartmuseum.org.

Queen at Ensemble Theatre
In Madhuri Shekar’s Queen, a pair of Ph.D. candidates are on the brink of a major research breakthrough regarding colony collapse disorder, a mysterious — and real — plague that is destroying honeybee colonies. At the University of California-Santa Cruz, Ariel Spiegel (Jordan Trovillion) is an impassioned biologist with a past in beekeeping. Her research partner, Sanam Shah (Shonita Joshi), is a more introverted statistician. Under pressure from their academic advisor, the women have advanced to the point of releasing their findings.  But there’s a hitch: Sanam’s statistical modeling has gone awry. Read CityBeat theater critic Rick Pender’s review. Through March 19. $55 adults; $29 students; $27 children. Ensemble Theatre Cincinnati, 1127 Vine St., Over-the-Rhine, ensemblecincinnati.org. 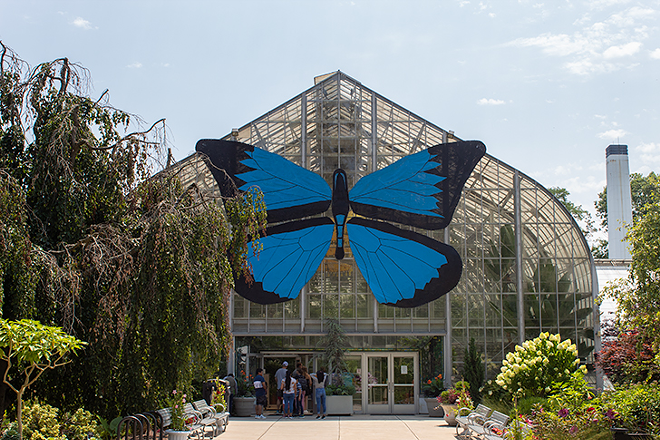 Krohn Conservatory’s 2022 butterfly show will feature the butterflies of Egypt.

Butterflies of the Nile at Krohn Conservatory
The beauty and mystery of Ancient Egypt is descending on Cincinnati’s Krohn Conservatory — or at least its butterflies are. Krohn has announced the theme for its super-popular annual butterfly show: Butterflies of the Nile.  A description provided by Cincinnati Parks (which oversees Krohn) says the floral exhibit will be “specifically designed to show just how lush and inviting the gardens of ancient Egypt could be.” Design elements have been lifted from the art found in Egyptian tombs and temples and call to mind imagery like “orchards, palms and fish ponds with lotus plants.” This show requires a timed ticket; only 100 spots are available for each one-hour interval. Through June 19. $10 adults; $7 children; free for ages 4 and under. 1501 Eden Park Drive, Eden Park, krohn.ticketspice.com.

Cyclones Pucks N Pups Night
Another sport will be played on the ice at Heritage Bank Center during this weekend’s Cyclones vs. Komets game. The team is hosting a “Pucks N Pups” night. Special tickets are available to bring your furry friend to the match, and during intermission, dachshunds will take the rink in a friendly race to see who the fastest wiener is. As a bonus, there will be $1 hot dogs at the concession stand. For Pucks N Pups tickets, call 513-548-3314. 6:30 p.m. doors March 19.  $19 per person; $5 dogs. 100 Broadway St., Downtown, cycloneshockey.com.

The Dollyrots at Southgate House Revival
Husband-and-wife duo Luis Cabezas and Kelly Ogden, aka the Punk Rock band The Dollyrots, recently released Down the Rabbit Hole, a collection of rarities, B-sides and covers.  “As far as covers, these (on Down the Rabbit Hole) are personal to us, that all mean something, and that’s why we picked them. But we have a whole bunch of acoustic covers that we’ve recorded over the past 10 years or so,” Ogden says. Songs include “American Girl” by Tom Petty, “Dancing with Myself” by Billy Idol and “Earth Angel” by the Penguins. Read an interview with Dollyrots at citybeat.com.  Doors 7 p.m. March 19. $18 advance; $20 day-of. Southgate House Revival, 111 E. Sixth St., Newport, southgatehouse.com.

Hamlet at Cincinnati Shakespeare Company
Actress Sara Clark plays the titular role of the tragic Danish prince in this Shakespeare classic. Hamlet’s father, the king, dies under mysterious circumstances only to have his brother — Hamlet’s uncle — ascend the throne and steal his queen. A story of revenge unfolds as Hamlet attempts to expose the villainy of his uncle. Cincy Shakes says, “Incest and intrigue, murder and madness, triumph and treachery all combine to paint one of the most complex and compelling portraits in all of English literature.” Read CityBeat theater critic Rick Pender’s review. Through March 20. $25. 1195 Elm St., Over-the-Rhine, cincyshakes.com.

Leonardo da Vinci: Machines in Motion at National Museum of the U.S. Air Force
The largest hands-on display of replicas of Leonardo da Vinci’s machines is now on view, and you won’t have to go to Italy to see it. Leonardo da Vinci: Machines in Motion is open at the National Museum of the U.S. Air Force in Dayton, Ohio. It features 40 full-size working recreations of da Vinci’s inventions from the late 15th century. Highlights of da Vinci’s “working” examples include a revolving crane, a full-size armored tank, a robot and four different flying machines. Through May 8. Free admission. 1100 Spaatz St., Dayton, Ohio/Wright-Patterson Air Force Base, nationalmuseum.af.