Photo: Provided by Hen of the Woods

Hen of the Woods has a special Super Bowl snack bundle for $43.99.

No Super Bowl watch party is complete without snacks. And since the Bengals haven’t been to the big game since 1989, Cincinnatians haven’t really had any reason to pull out all the stops.

Until now, that is.

Bengals fans can show their stripes by making appetizers that incorporate Queen City classics. Some of the recipes below come directly from local chains, while others are riffs on popular snacks, made with Cincinnati ingredients.

Those who don’t feel like cooking can still prove their Cincy pride by grabbing a Super Bowl package from local artisan potato chip company Hen of the Woods.

Their “Big Game Bundle” comes with all six Hen of the Woods chip flavors and dip mix in buttermilk ranch, white cheddar jalapeno and buffalo ranch. Visit henofthewoodsotr.com for details. 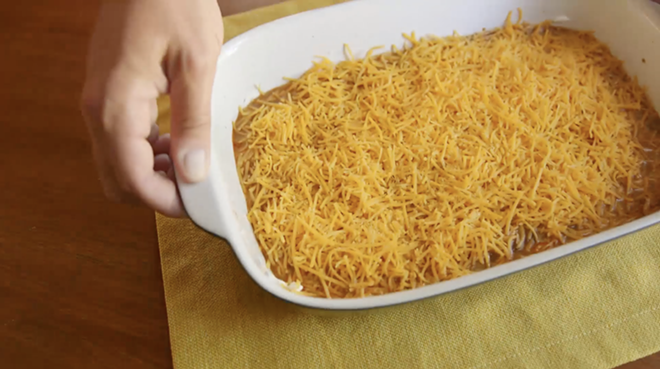 Skyline Chili dip is made with cream cheese, chili and shredded cheese.

It’s a Cincinnati staple. Layers of cream cheese (and onions and mustard, if you’re feeling wild), chili and a heavy helping of shredded cheddar cheese make this a salty, savory, scoopable masterpiece. Your family may have their own variation, but this is Skyline’s official recipe. Serve it with tortilla chips.

Instructions: Preheat oven to 375 degrees. Spread the cream cheese into a 9-inch-by-13-inch baking dish. Heat the chili in the microwave or on the stove top until warm. Spread the chili on top of the cream cheese. Place the pan in the oven and bake for 10 minutes. Remove from the oven and top with shredded cheese. Let stand for 5 minutes or until the cheese begins to melt.

Since Gold Star is the official chili of the Cincinnati Bengals, it only makes sense to include the brand in your game-day spread. These mini dogs are like pigs in a blanket surrounding a swimming pool of chili. Watch a recipe demo at goldstarchili.com/recipes.

Instructions: Break open two cans of crescent rolls. Cut individual crescent triangles in half. Baste the inside of each dough triangle with a wash of yellow mustard. Wrap each triangle around a cocktail wiener. Place the wrapped wieners upright (like little fingers) two layers deep around the edge of a cast iron skillet (a baking dish or round cake pan also could work), leaving space in the center for the chili. Bake the wrapped wieners at 375 degrees for 15 minutes. Take the skillet out of the oven and fill the center with chili, topping it with as much onion and cheese as you’d like. Place the skillet back into the oven for 5 minutes or until chili is warmed through and the cheese is melted.

Load up slices of pumpernickel with cheesy goetta for a portable party snack with very little prep time. This is the official recipe from Glier’s Goetta. A how-to video is available on their Facebook page.

Instructions: Brown the goetta and then the hamburger. Drain well and return to the pan. Add Velveeta to the meat, followed by garlic powder, oregano and Worcestershire sauce. Add the milk a bit at a time to reach the desired thickness. Spread the cheese and meat mixture onto the bread. Bake at 425 degrees for 5 minutes or until bread is toasted and the topping is bubbling and slightly browned.

To bring Frisch’s to your Super Bowl party, make this pizza version of the chain’s classic Big Boy sandwich. By swapping Frisch’s Tartar sauce for pizza sauce and topping it with cheesy ground beef, you can transform a regular pizza into a Cincinnati special. Find this recipe and others at frischs.com.

Instructions: Preheat oven to 450 degrees. Bake the pizza crust according to the directions on the package, removing it from the oven when it’s browned but not done. Brown the ground beef, season it with salt and pepper, then drain. Spread a 9-ounce jar of Frisch’s Tartar sauce on top of the crust and add a layer of ground beef. Sprinkle shredded cheddar or American cheese over the entire pizza. Bake until the cheese is melted (about 5 minutes). Top with shredded lettuce if desired.

Put a Cincinnati spin on any barbecue chicken slider recipe by using Montgomery Inn barbecue sauce. This one is from tasty.co, an offshoot of Buzzfeed.

Instructions: Preheat the oven to 350 degrees. Slice the rolls in half lengthwise. Place the bottom half of the rolls in a 9-inch-by-13-inch rimmed baking dish. Spread the chicken evenly over the rolls, followed by the barbecue sauce, red onion, pepper jack cheese and parsley. Top with the remaining rolls and brush the tops with melted butter. Bake for 20 minutes, or until the bread is golden brown. Slice into individual sliders, then serve.

No party food is more classic than a good-old pepperoni pizza. But when you want to save some room for other snack options, a bite-sized ‘za is a perfect solution. Throw some LaRosa’s pizza sauce on it, and you’ve got yourself a Queen City version of a favorite. LaRosa’s has also released the spicy “diablo” version of its sauce in jars, currently available at Jungle Jim’s and LaRosa’s. This pizza bagel recipe is an adaptation of a Betty Crocker recipe.

Instructions: Preheat oven to 400 degrees. Split mini bagels in half and place on top of a lined baking sheet. Spread a layer of LaRosa’s pizza sauce onto each bagel. Top with shredded mozzarella and other favorite pizza toppings. Bake for 10-12 minutes until the cheese is melted.