It’s not like Oba Rhodes set out to become a food sculptor. It’s true he’s always been artistically inclined; drawing used to be his preferred medium, way before he discovered a knack for carving watermelons. But creating 3D art out of food just kind of…happened.

“It was by chance,” says Rhodes, a Madisonville native. “I was watching a Halloween competition show. They were doing pumpkins; I was eating an apple. I saw him carve a face in this pumpkin, so I attempted to carve an eye in the apple. I thought it looked pretty cool, so I posted it. People liked it, so I went and got some more fruit. I carved a face in a mango. Somebody told me, ‘You know you can make money doing this?’ I said, ‘But it’s fruit!’”

Rhodes began by putting together baskets of carved fruits, which then led to opportunities to create table displays for social events under the business name Edible Sculpted Creations. “I was more interested in doing pumpkins, but you can only do pumpkins once a year. So the pumpkins actually pushed me into sculpting watermelons.”

Rhodes’ carved creations are truly a delight to behold and include whimsical pumpkin faces, watermelon portraiture and even a honeydew Yoda. COVID impacted his business, Edible Sculpted Creations (social events and parties were in short supply during the pandemic), but he kept honing his craft, reimagining his business and hoping for a big break.

“I manifested it some time back,” he says. “But I didn’t know it would be Disney who made the call.” 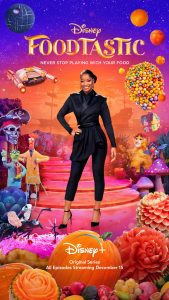 Indeed, producers from Foodtastic—a new Disney+ competition show featuring food sculptors from all over recreating Disney scenes from edible media—called up Rhodes with an offer to bring his skills to the streamer. The show premieres this Wednesday, Dec. 15.

“I was speechless!” he explains. “It was a dream come true. The next thing I did was call my mom.”

Foodtastic, hosted by actress Keke Palmer—“I’m a huge, huge, huge fan of Keke Palmer, but I was calm, I was cool,” Rhodes says—pits teams of food sculptors against each other to create extravagant scenes from Disney properties, including The Lion King, Star Wars, and the Marvel Cinematic Universe. Each team brings its own perspective, and Rhodes is quick to point out that his team was comprised of himself and two fellow Ohioans, a fact that directly influenced their creative decisions.

“We went all the way with Midwest representation,” he says. “We brought that whole industrial, family-oriented thing to the table.”

Rhodes won’t give away any spoilers about his appearance on Foodtastic (despite pleas from friends and family), urging people to tune in and see what he and his team manage to create (and also to learn if they win their episode’s competition). But when asked if there’s anything he can share, Rhodes points to one important detail.

“My fans following me or my events always see high energy and they always see me working hard,” he says. “I can tell you this, though, I’ve never worked as hard in my life as I did on Foodtastic. And you’re going to see that.”

The Foodtastic appearance is a one-off event, but Rhodes gleaned plenty of creative inspiration from the experience. One major takeaway? Showmanship matters.

“We ended up coming up with a superhero carver who shows up to events,” Rhodes explains. “The kids love him. His name is the Sculptinizer. He has a team of three and everyone’s in costume.”

Using the Sculptinizer character, Rhodes’ company offers carving classes for kids. (They offer adult carving classes, too, and plan to open a dedicated space in Lockland/Lincoln Heights in January.) “The Sculptinizer has made like five appearances and now the kids are requesting this guy!”

Tune in to Foodtastic on Disney+ to watch Rhodes flex his creativity this week, when all the episodes drop.